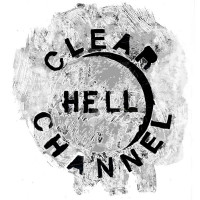 According to Clear Channel, “God created bass - and of the bass, God created Mary. Mary was lonely, and so she asked God to sculpt Carson and Awad out of a kick drum and a pair of bongos, and then Don joined and all was right with the world. This is their first record together.”

The statement might be silly, but it’s also accurate in that this band worships the bass- rightfully so. Mary Relagado’s low, steely bass is front center for all of these tracks. She plays with the massive, cold pulse of Peter Hook and the bouncy spring of Tessa Pollitt. The result is a sound that’s equal parts threatening and industrial. Through this drive, the band shapes a series of post-punk, minimalist tracks that are catchy and abstract.

“B.B.I.” or “Bad Bitch International” has the cryptic message “Walk on thin ice for me, please make it better.” I have no idea what that means but it sounds persona and also cool as hell. Main vocalist Awad is particularly interesting a points like these. He shifts from a Krautrock emotion-less deliver to the the deep warmth of 70s R&B across a single line, almost as if he’s a computer program learning what it is to be human.

To add to that, Relagado also counters with a ghostly wail, which gives the entire record a spooky atmosphere. “M.O.C.” finds Awad and Relegado wailing like they are in purgatory, singing simultaneously “My only complaint is that I’m bored.” They don’t sound human- they sound like punished spirits vising Ebenezer Scrooge late at night. It’s weird and chilling.

Yet, where the band could veer into sinking self-seriousness, the kick out a few laughs here and there/ “Hot Fruit”, which is backed by a Casio style world-beat has the lyrics “I’m looking for cherries, who has a cherry, show me your cherry!” I mean, I get the symbolism, but this is hilarious, skillfully so. It’s an interesting contrast- where the band is cold and distance more often then not, sometimes they let uncontrolled ID break through.

The album closes with the title track where they scream “We are living hell!” That’s an interesting statement since the band claims to be of divine providence. I guess that goes to what your perspective of Hell is. Here, the greatness of the release comes from the fact that Clear Channel’s perspective is so alien, yet you know there’s something very worldly in that vision.

All Time Low: Wake Up Sunshine