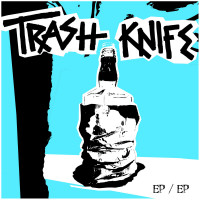 Trash Knife is a new-ish band out of Philadelphia. They play raw, ragged punk that is as influenced by the Germs as it is the Avengers. What makes the band particularly interesting in that they show the complexity of ostensibly simple concepts all while making it look like they just want to party. Also, they totally rock.

EP/EP collects the band’s two main 7-inch EPs and adds on a newly record bonus track. On both sides, the band is wonderfully West Coast loose. There are echoes of Dangerhouse here as guitarists Steve and Sean throw fuzzy, edged riffs at each other that recall the wagged-out attack of “Circle One.” Drummer Mat throws the whole thing forward in a fast and rumbling style- the band sounds like they’re ready to crash at all times, which makes the music that much more exciting.

Meanwhile, vocalist Lauren crashes down, sounding like she just got back from a twelve hour rager. She flips between a sing-songy cadence (on “no one’s dancing” she calls out, asking if you can do the mash potato) and a more furor laced blast. On “I’m Done,” which kicks like the Pagans, she spits and screams in frustration about her bills and other assorted troubles. What’s clever here is that while Lauren sometimes to just be complaining or stating the obvious, like on “Tips,” which is about cheapasses, there’s actually more to the scene than just the lyrics. “I’m not your bitch!” is slid in there, which suggests that’s there more to contemplate here than just why you should be a nice tipper. The band is commenting on larger issues than the lyrics express at their most literal level, but they don’t spell it out. Check out “Rhonda” which is about wanting to be friends with Rhonda Rousey. It’s a weird, askew track that might be an ode to a powerful figure or it might be about being weirdly obsessed with the image of a person or thing that isn’t actually real. Or maybe it’s just a funny concept? That’s the cleverness of this band.

The new track, “PPA,” features newest member Leora Colby (of Thulsa Doom) on bass and like the other tracks, the tune is white hot, fast, and jagged. The track is coated in white noise and further expresses that this band is wild, but they’re not just wild. There’s a deep intelligence here.

Frankly, all of these songs kick and pretty much any one of them could be a killer single. This is punk that harkens back to the primal blast of the first and second waves, but isn’t retro- it’s just pure. This rips. Let’s have an album.