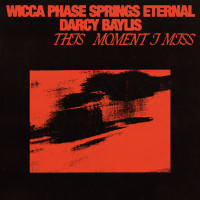 He has a flow that’s awkwardly endearing, and his verses are painstakingly belted out as if he’s reluctantly reading love letters aloud. He sounds flat for the most part, and Adam McIlwee even admits, “I was raised by Polish Catholics / No one taught me how to sing, obviously” as he vocally aches through the darkwave-inspired “Obsessed.”

What might be considered flaws, are the idiosyncrasies that have made Wicca Phase a bellwether in the underground emo-trap scene - house and hip-hops beats fused with damp tonality and moody deliveries. As he continues to progress and transcend the Soundcloud rap stigma, his punk rock foundation has become more revealing, integrating more guitar and affectionate, yet vulnerable melodies from his Tigers Jaw days into his writing. The stirring riffs he initially ditched became the final piece in truly crystalizing his sound, most notably on 2019’s Suffer On.

This Moment I Miss pairs Wicca Phase with producer Darcy Baylis, who of which collaborates in marrying deep beats with the depth of a complete-sounding band. Baylis also performs and lends lyrics to the record, most notably on the excruciating “Pain Killer.” The emotionally heavy track is chilling and immediately gripping, where the sound machines are forfeited to create a straightforward indie-rock gutbuster. Wicca Phase wails through heartache in the verses, where Baylis picks him up with mind-numbing, dream-pop mellowness with the literal and metaphorical line, “But the white horse will take me away / From the pain I can’t kill today.”

“Pull It Forward” continues from where Suffer On left off, mixing eerie chords with stretched out BPMs. Lyrically, it’s one of Wicca Phase’s most advanced and complex tracks to date, where feelings of emptiness and loss pour out through rhyme-less words and swirling tones. It’s then lifted by the hype-focused, in-your-face “Hardcore,” a crowd-mover where a direct and no-nonsense punk song lies behind the beats. “I Want To Go Out Tonight” takes Wicca Phase back to the origins of the GothBoiClique that created an internet subculture of rap influenced by emo and pop-punk of the early 2010s. The track is droney and dreary, but has a paradoxical positivity to it, like when he boasts, “Now that life’s stopped spiraling / And I finally feel inside / I want to be bad / I want to go out tonight.”

This Moment I Miss will surely satisfy the Wicca Phase loyalists and any follower of emo-trap and it’s parallel subgenres. It’s not going to create any new fans, but as I experienced, this foreign sound and emerging style of music takes some time to digest once you get yourself past the initial scoffing and eye-rolling. Start with Suffer On, and let it marinate over a few runs through, and eventually you’ll find yourself ungracefully bopping while muttering out the hooks. You’ll then see that This Moment I Miss is Wicca Phase’s big next step before dipping his toes into the mainstream.