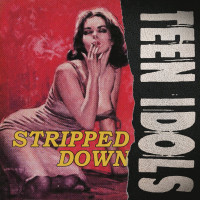 Nashville’s Teen Idols first burst onto the scene in the early 90’s with a string of EPs and took the underground pop-punk world by storm. Relentless touring resulted in them quickly getting on the radar of punk rock fans worldwide. In 1997, the Teen Idols released their self-titled debut album to critical acclaim. The band continued to tour heavily throughout the remainder of the 90s and into the new millennium with all the heavyweights of the day. The band, well-known for wearing their band logo proudly on the back of their leather jackets, went through various line up changes prior to calling it quits. This 7” features two unreleased tracks that were recorded initially for a never released acoustic compilation album after the band’s 2009 reformation. For these tracks, band leader Phillip Hill handles guitar, upright bass and piano. He is joined by pop-punk veteran drummer Dan Lumley (Squirtgun, Screeching Weasel, etc). Female backing vocals are courtesy of studio vocalist Heidi Faith. Long time Teen Idols front man Keith Witt returned to the fold for these recordings. If acoustic music in general is not your cup of tea, have no fear! This 7” single rocks.

Side A features the fan favorite “Everyday Is Saturday” which originally appears on the 2000 album Full Leather Jacket. This version has more of a country vibe than the original recording. Phillip’s upright bass work is prominent on this track. The bassline is moving throughout which gives it a driving pop-punk feel. Keith sounds better than ever on vocals. What I appreciate about acoustic renditions of heavier songs is the audibility of the vocals. This makes for more easily making out the lyrics. I previously was not familiar with Heidi Faith. She does the female vocals, previously performed by Teen Idols longtime bassist Heather, justice. Dan Lumley provides solid upbeat drumming throughout. The outro of this track features extremely effective cymbal crashes that add to the catchiness and aggressiveness of the song. Side B features the title track from the 1999 album Pucker Up. This track sounds closer to the original than the flipside of this record. The Teen Idols rock this track just as hard as the original. This short and sweet track represents musically what the band has always been about; fast pop-punk with extreme melody through backing vocals. All these elements are present on this version. What is interesting is that the hand claps heard on the original are replaced with accentuated acoustic guitar chords. Also, this version contains subtle, yet effective, piano in the pre-chorus. Aside from the music, the track features the melodic signature backing vocals of the Teen Idols.

Longtime fans will be excited for this release. It has been many years since new Teen Idols material has hit anyone’s turntable. Thanks to Hey Pizza Records, these 2009 tracks will finally see the light of day. There is a definite resurgence in popularity of the 90s pop-punk sound. One can hope this release will expose younger fans to Nashville’s greatest export. One can also hope that the Teen Idols have other unreleased material somewhere deep in the vaults.