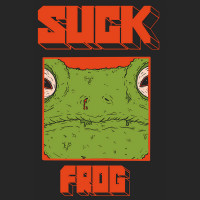 Suck excel because they are wonderfully unguarded. Frog is the German trio’s first proper EP and they’re already fully formed as a band. Vocalist/synthasist Isabell sets her vocal attack in the sweet spot between singing and screaming, ala Penelope Houston, and every so often she shrieks so hard the music red lines. She focuses her at the personal level, detailing getting harassed by boring dudes, or, as on “Roadkill,” she details the fate of jealous backstabbers.

She’s also really funny. There’s “Mama’s got a backpatch,” which is funny enough just based on the title. But also, as with “Gimme your number,” although she’s just being honest, her exasperation is self-aware and she let’s us joke with her in her exhaustion. And to that point, there’s not artifice here. She’s writing as if she really doesn’t care what you think or even if you side with her or not. But, of course, we do side with her because she let’s us inside her brain and also because she’s not so seriously in that she cant laugh at her own predicament. “I just wanna lose my shit tonight!” she calls out in detachment on “decadent life.” This is the kind of danger and nihilism I like in my punk rock, for sure.

The music kicks, too. Most of the songs here a re rooted in first or second wave punk charge, with a little hard rock swagger here or there. “Backpatch” starts out as a ripper before it slams down into a Sabbath-esque drone. Nice. Often the band starts off with a hot fire, only to push the track somewhere unusual. “Bulletproof” features Isabell’s synthesizer on the second half where she cranks it like it’s Angus Young’s guitar. Sometimes she uses a Kraftwerk-style vibe and sometimes she spazzes out. The instrument is flexible enough to create a sinister edge or a surprisingly burning solo.

Frog is the band’s first strike and like many of the greats, this band is already fully functioning and “mature” on their first release. Sometimes, that can be a curse for bands as they can never live up to their initial spark. I’m not fearing that here. There are enough ideas packed into these six tracks that show this band has a lot of places to go, and it looks like it’s going to be a fun ride.