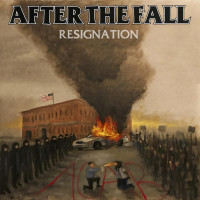 Albany's After The Fall are a band that whenever you hear they've got new music out, even if it's just one track, stop what you're doing and soak it in ASAP. Albums like Unkind and Dedication show why they're one of the best melding skate punk and melodic hardcore, and Resignation sticks true to their core once more. In just under 13 minutes, you get breakneck jams on politics, the shitty world we live in and also, some self-introspection that goes way beyond angry thoughts of rebellion.

There are so many influences here: The Offspring, Sum 41, Rise Against, Brutal Youth, Comeback Kid and Kid Dynamite. But After The Fall knows what to pull and what to jettison as they carve out their own identity. Looking at the opening tracks, they're similar and sound like one song split into two -- "I Don't Wanna Be Around" and "Up and Down" -- but as usual, when the band produces short, punchy tracks, each one, no matter, what stands alone and stands powerfully at that. There's so much emotion chocked in here, and again, it's very catchy and accessible per the gang vocals on "Absent Minded", sating fans who wanted more of Blink-182's "Generational Divide".

Even the longest track, 2:24 ("Got Your Back"), feels like a lifetime because you're just accustomed to hard-hitting bangers. Not that this isn't just that, of course. And there's a bit of star power as well as Rise Against's Tim McIlrath continues his love for the band on "No Resolve". I mean, it's honestly a bit too short (hey, this isn't Joyce Manor) but again I love how the record sways into the mental health take on things as well in songs like "Panic Attacks" and also, how it calls society out on "Decency". They compound a record that's filled with rift, dynamic melodies, and a technical proficiency that hits the sweet spot earnestly, with a lot of speed and authority. After The Fall don't disappoint at all and their fans will be left wanting a lore more and quickly.

I'm Glad It's You: Every Sun, Every Moon