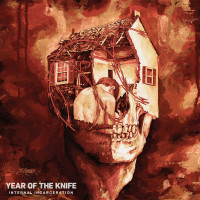 Year of the Knife is poised for a breakout moment. They’ve paid their dues on the road opening for modern day hardcore heavyweights. And as anybody who's seen them can attest, they bring the mosh. Their debut Ultimate Aggression mixed together bass heavy metallic hardcore with shines of something more drawing in populist nu-metal tendencies. With the added production of Converge guitarist Kurt Ballou, Year of the Knife blew that promise up while putting down markers for further ones.

Internal Incarceration is heavy by production standards and sheer musical aggression. It's a pounding listen from front to back that quite literally captures incarceration of the mind. Touching on subjects like mental health, addiction, and societal inspired isolation, vocalist Tyler Mullen spits acidic fuck yous often and with liberty at his own failings, disease, and personal trappings in gutteral rage. His vocal range spans the spectrum of heavy, from the guttural to the more traditional metallic hardcore yells. Perfect example is when Mullen rolls into a darker growl in the closing seconds of “Virtual Narcotic.”

Production from Ballou really brought a heavier version of Year of the Knife to the forefront. A lesser able producer may have pushed them into more of the popular groove oriented playing that would sync up with Miller’s vocal patterns. Not the case here as the band, composed of Aaron and Andrew Kisielewski on guitar and drums, and Brandon and Madison Watkins on guitar and bass, is clearly pulling more greatly from death metal influences.

Double bass drum often holds together transitions through songs like in “Sick Statistic” and “Manipulation Artist.” That doesn’t mean Year of the Knife abandons their hardcore roots. A sludgy Black Flag-influenced riff in “Nothing to Nobody” indulges the pulverizing breakdowns. “Eviction” holds all of this together in one song. Galloping industrial drums open up the song with nu-metal vocal theatrics before double bass drums riffage gives way to one of the angriest breakdowns on the release.

Internal Incarceration doesn’t compare easily to Ultimate Aggression. It’s a step up all around amplified by exceptional production with the band exploring heavier influences more openly. In that sense, it exceeds their last outing, but since the growth feels more like a new direction than an extension, it also sets expectations up again. It feels like there’s something even more ambitious lurking in the underbelly.

I'm Glad It's You: Every Sun, Every Moon