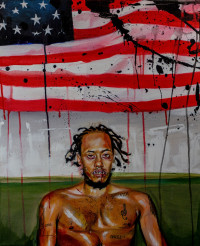 A collage of tape hiss, screeching noise, and uncomfortable free jazz associations brings the listener into Pink Siifu’s NEGRO. This collage of sound gives way to the distorted words of David Lemieux in The Spook Who Sat By The Door, a book and movie satirizing the violent reactions of white America to the Civil Rights Movement and a politically motivated diversity effort at the CIA. NEGRO is the second full length effort from Pink Siifu and directly channels the anger of Black America. From the album aesthetics, to the intentionality of samples, to the listed influences, NEGRO is an art project stemming from heartbreak, anger, and rage perpetrated at the hands of police reflecting white America writ-large.

NEGRO pulls from Pink Siifu’s past performances mixing free jazz, lo-fi hip-hop, and samples liberally, but also brings in elements of hardcore and noise. Named in an essay on the album’s explanatory ethos accompanying the release is a list of its influences. Black punk rock pioneers Death and Bad Brains are named as well as the aurally similar Ho99o9 among others. “FK” puts these influences at the forefront with a distorted three chord punk song underlining expressions of outrage and disbelief experienced with fearing for your life in the shadow of a racist society policed by killer cops.

This topic is ever present on NEGRO just as its explicit for Black America. “ameriKKKa, try no pork.” begins with multiple snippets from newscasts covering the murder of Black men at the hands of police including Philando Castille and E.J. Bradford before a woman explains the final moments of a loved one’s life with enough dissonant noise to replicate the numbness and trauma experienced under the hands of constant state violence and threat. The song serves as the beginning of an album arc. “run pig run.,” “DEADMEAT,” and “myheartHURT” build into “Chris Dorner” which serves as a cathartic punk song and release of manic anger that has Pink Siifu conjuring the yips of H.R. in his prime.

After a brief reprieve in “Nation Tyme.” introducing the back end of the release, NEGRO welcomes a handful of collaborators including Moor Mother and THE OGM from Ho99o9. In both the collaborations and lyrical content, Siifu turns the violence of the first half of the record into genuine concern for his Black family on the second and a tragic yet self-protecting acceptance of a similar fate. The disregard for Black lives holds two truths in tension as present in NEGRO - liberation comes from the pain created at the hands of white America and through that pain comes love and understanding within the Black community.

It is illuminating that throughout NEGRO, there are still moments of Black joy. As Pink Siifu states in the aforementioned album essay, Blackness is his only salvation. There are classic soul samples, cultural moments, and poetry interspersed between the outrage that emanates this. It comes notably on the transition of the punk influenced beginning of “ON FIRE, PRAY!” that ends the album into “Black Be Tha God, NEGRO. ( wisdom.cipher).” The last track finds Siifu rapping over light jazz dedicating to his Black family.