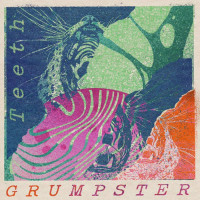 It’s not often a pop punk band will grab my attention the way Grumpster did with their debut full length Underwhelmed. I suppose it could be that I’m just at that age, but their style is so familiar to me, borrowed straight from the golden age of pop punk (when you could still listen to Screeching Weasel guilt-free), that it sounds completely fresh. More likely though, is that these kids just know what they’re doing. Grumpster recently released two surprise new singles.

Deeper than the simple break up song it may appear to be on the surface, “Teeth” is a crafty and rambunctious ‘fuck you’ to the toxic relationships that inhibit the very character of the innocent party trapped within. A dense, buzzing guitar flies along so unwieldy, it’s like a beast with its own sinister agenda, who still never leaves its friends behind. The drums are a little low in the mix, but the cleverly arranged fills sharply follow even the most subtle dips and climbs in the vocals.

The slightly more recent release, “Growing Pains”, takes on a broader scope. The lyrics speak to the same teenage angst that never seems to skip a generation. Not that it’s all that fair to reduce the song and its universe to such a petty word as angst. These important years are all about boredom, numbness, loathing, guilt, escapism, identity crises. You know, lots of good times. The vocals run more monotone here, over the same roaring guitar and spitfire drums; like the curtailed soul of the lyrics drifting through a world on the go around them.

The two singles will be released together on a 7-inch under the name Mindless later this year.