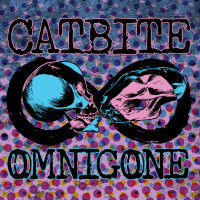 Ouroboros is the name of the game for this Catbite/Omnigone split EP and that’s just dandy. Catbite is a new-ish two-tone band out of Philadelphia that calls back to the Specials, the Selecter, and Little Richard with a decidedly modern sheen. Omnigone is the aggressive ska project fronted by Adam Davis of Link 80/Gnarboots and was established as a way for Davis to get back to his punk-ska roots while maintaining his contemporary (sometimes dark) world view. The interesting thing is that Omnigone learned of Catbite by surfing the web and was charged by their debut LP… meanwhile, as it turns out, the members of Catbite had previously been influenced by Davis’ Link 80. So, on the split EP, each band covers the other and also covers an influence.

Catbite surprisingly covers one of Omnigone’s more angry tracks, “Horizontal Aggresssion.” Where the original version leaned more on the punky side, the Catbite version mixes in a two-tone and third wave vibe. Singer Brittany drops out Davis’ throat-shredding anger and adds in an icier slash, which gives the track a cold burn anger while reworking the track. Guitarist Tim keeps the track bouncing along with a hard hitting jump, so that it’s fun but meaningful at the same time. The band’s second strike on the release is a cover of the Clash’s “White Riot,” in a classic three-chord attack form. It’s a well placed strike considering that the original tune was asking why white people don’t riot like POCs in times of unrest- while Catbite's lineup includes POCs and there is actual rioting in the streets right now. Catbite knows that ska is welded with steel to politics and make that point through re-working a pre-ska punk classic. Well done.

On the flipside, Omnigone has the reverse approach of Catbite. Whereas Catbite nice up-ed Omnigone’s rage, Omnigone takes the playful “Scratch me up” and shocks into into a bloody attack. A hot guitar and rumbling bass serve as the backbone here while Davis howls in a hardcore furor. It’s wild and considering the fact that the lyrics juggle the concepts of pleasure and pain, it somewhat raises the question – is the purpose of anger and that it is also kind of fun and can be a mental release? (The old school NYHC breakdown on the track’s second half is *chef’s kiss*). Omnigone’s non-Catbite cover further bend the Ourboros. The band covers “Nothing New,” which was previously recorded by Link 80, which before that, was a song by the obscure band “The Blast Bandits,” which also included Omnigone’s Barry Krippene (who was a writer of the song, but was not in the band at the time of that songs recording – it was Andy Pohl of Tsunami Bomb… whew! So, in essence, the track is a reclamtion of history.) Anyways, the track rocks. The band makes no bones about their third-wave history/pedigree and jack up the up-strokes and riffage. As with many Omnigone tracks, there’s a sense of ire and of playfulness. Usually ska (especially third-wave) is seen as a goofy form of entertainment. Omnigone, here, make the argument that the real message here is isolation/alienation/anger and the upstrokes are just a vehicle. That’s the way to do it.