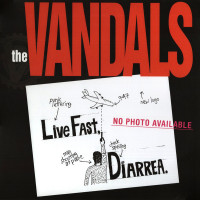 In the time of plague, I’ve been plugging the hole in my soul usually filled by live shows with copious amounts of vinyl. I’m sure I’m not the only one. On a related note, Nitro and Craft Records have decided to team up for a 25th anniversary reissue of The Vandals’ Live Fast Diarrhea on splatter brown vinyl. I love the way this record looks, and Craft vinyl always has great sound. But is the music itself worthy of such deluxe treatment? That is the question I will attempt to answer over the course of the next couple hundred words before I lay down my hard earned cash.

In the name of fairness, I should warn you that I’m partial to the original Vandals with Stevo singing that were around in the first half of the ‘80s. That was obviously a completely different band than exists today. Only Joe Escalante remains from that early lineup, and even he switched from drums to bass. That band was really something special. The Vandals of the ‘90s were essentially a pretty good pop punk band. (For an even better example of this, see the Misfits.)

First, the good - Live Fast Diarrhea starts off well enough with “Let the Bad Times Roll”. Hardly a classic, but a solid opener. Third track, “And Now We Dance”, is solid too. The best song on the record is a cover, which is never a good sign. Still, The Vandals’ version of The Simpletones’ “I Have a Date” is good, clean fun. “Ape Shall Never Kill Ape”, the title track and “Kick Me” are the best of the rest.

Next, the mediocre - The Vandals have always been good at writing funny songs. Here, there are too many comedy songs. There is a difference. Some of the songs just feel half baked. “Take It Back”, “Power Mustache”, “Happy Birthday to Me”, “Change My Pants”, and “Get In Line” would be good one off EP tracks, but sticking a bunch of them together does not make a proper LP. Others, like “N.I.M.B.Y.” and “Johnny Two Bags” have just not aged well. While Johnny is still an O.C. punk legend, does anybody under 45 remember G.E. Smith? “Supercalifragilisticexpialidocious” might be a fan favorite, but that doesn’t make it good.

I’m surprised by how many people seem to absolutely love this record. I guess I can see it if you were like 14 when it came out. Ultimately, I think The Quickening and Hitler Bad, Vandals Good are both superior to this. (Not to mention Peace Thru Vandalism, which is their masterpiece.) I suppose it comes down to one’s entry point. The first record you hear by a band tends to stick as your favorite, and you can never underestimate the power of nostalgia.

Will I pick up the new version? I don’t know. Maybe. The truth is, Live Fast Diarrhea is not as good as most LPs getting special edition reissues. A six dollar used CD should really be sufficient. Still, it is fun, and that brown splatter vinyl looks really cool…

Radio Blast: In Your Face! [EP]