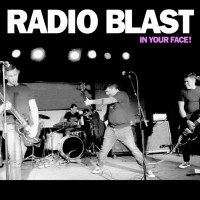 If someone had told me 10 years ago that in the year 2020 I would review as many pop punk releases that I have thus far, I would have a hard time believing. Across the globe bands are strapping on their Chuck Taylors and guitar straps to lay down the “four to the floor” beat which has been the backbone of the genre. The latter half of this historic year has brought us this 4-song debut EP by Radio Blast who hail from New York, New York. By hometown and band name, it would be no surprise that this band leans towards the Ramonescore spectrum of pop punk.

The title track “In Your Face” kicks off this powerful EP in style. Right off the bat, you know what you are in for with the fast downstroke chords coming out of the speakers. The pace is very quick and steady on this opener. The chorus boasts catchy and powerful backing vocals. There is no denying the Riverdales influence on Radio Blast. It should be noted that Rev Norb of Boris the Sprinkler fame makes a guest vocal appearance. This is probably no coincidence that this man also appeared on the lead off track of the debut Riverdales album many moons ago. “She’s A Cannibal” is up next. This track stands out in having the vocals kick right in. Lyrically and musically, this track seems to be heavily influenced by Italian pop punk superstars The Manges. There are many chord changes throughout to keep things interesting. All the boxes to be checked on a perfect Ramonescore track are present on “Boy With The Six Pack.” This track will be stuck in your head for days with its great vocal harmonies and chord changes. Vocally, this track pays homage to Ben Weasel’s (Foster) approach in the Riverdales. Solid guitar leads are present throughout this number. “Teddy” closes out this set with a vengeance. This track tells the tale of Teddy the Enforcer who doesn’t put up with any nonsense on the ice! This could be their tribute to the Riverdales track “Blood on the Ice” from their sophomore album. This number boasts an extremely catchy fist pumping chorus. This track will certainly be an anthem for hockey fans and punks as well.

There has been no shortage of solid pop punk and Ramonescore releases this year. It is always refreshing to hear the classic sounds coming through from newer bands. Sure, there certainly is no new ground being broke here. Honestly, this genre thrives on bands who can successfully keep a solid beat and write a catchy song. There is no need for experimentation. Radio Blast wears their influences on their sleeves. Check this out or end up in the penalty box.