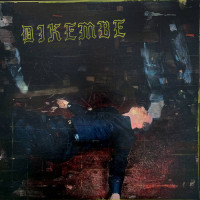 Gainesville's Dikembe are a band I've written about a lot here and one that kinda fell into that emo-revivalist genre a few years ago. After the last album, Hail Something, I could tell fans felt a bit polarised as it didn't lean heavily into the indie rock sound of old. It had more attributed to bands like Balance and Composure, Citizen, Superheaven and such. Now, it comes full-circle on Muck which unfortunately has a darker edge to it after the death of the mom of guitarist/vocalist Steven Gray, but it's worth noting that what results is one of the band's most left-field yet well-rounded albums to date.

Off the cuff, there's a lot of Soundgarden woven in, with the other half of the record employing a shoegaze approach. Tracks like "Sink" have a Title Fight aura (reminding me a bit of "Head in the Ceiling Fan") while the likes of "Wake" are embossed with that moody, atmospheric sound. In fact, there's a lot of '90s in here -- ergo the Soundgarden reference -- painting a novel on loss and the aftereffects with Gray and Co. at their vocal prime. But make no mistake, when they strike a balance, it's quite poignant. Songs like "Living in Walls" are a perfect example of this soundscape, mixing in the old aesthetic with the new while there are more nostalgic homages to the past in the catchier "All Got Sick" and ballad-esque "Perfect Mess" -- with the latter having that Modern Baseball ring to it.

But overall, the winding, tapping Midwest emo blankets have been replaced by thicker, grungier and dirtier elements. It's a cleaner production and way more minimalistic but when it gets angry and loud, Dikembe roar like a new engine after an American muscle car just got home from the garage. Again, "Old Husks" and "Throat" best exemplify this duality but what I think stands out most is that Grey's take on mortality and gloom doesn't necessarily have to be steeped in a morose bed all the time. It reminds me of I'm Glad It's You's album this year and I think Dikembe made the right move by scrubbing the sounds of old to deal with and embrace ghosts of old.