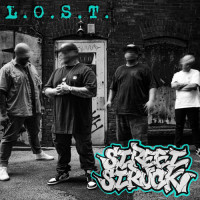 Street Struck are a new hardcore band who recently released their debut EP L.O.S.T.. On it, the Pennsylvanian quartet blend all the components that have become pillars of today’s hardcore sound and throw in their own unique twists. Leery as you may be at the image of the four tough guys with blurred-out faces on the cover, the real fright comes from what’s within their minds.

The mixing style on the EP brings the metal crossover sound that many hardcore albums are built upon these days, but only enough of a hint of it to leave the more classic East Coast vibe that the band is clearly more ardent to front and center. And yes, as is also expected, there are drops of nu-metal here and there, but thankfully they’re quite subtle. It’s really only noticeable in some of the guitar tones and the arrangements, which love a long intro, and a blend of hip-hop, metal, and hardcore vocals.

Not that I’ve been the least bit opposed to the nu-nu. If we can do something better the second time around, let’s go all out.

On “2420”, maniacal drumming cascades like a wildfire, leading into a gut wrenching tale of the aftermath of a suicide. The singer wails out the tragic honesty of those left behind with lines like “You lost your way/And on that day/You killed a part of me”. The voice, as on the entire record, is so close it’ll leave bruises on your face, and they put the slightest bit of slap-back on it, conveying the aural image of a man screaming at a wall; a metaphor certainly not lost.

“Harpy” goes into the more old school hardcore theme of calling out backstabbers and fair-weather friends. Guest vocalist Glenn Gucci comes in on a verse at the end, like the true ride-or-die standing beside you, something the antagonist could never be.

The complexities of the record come full circle on “Dark World”. Although no longer in real time than any other song here, the slowly brooding intro, killer riffs and solos, and best vocal performances of the set, has it come across as the most accomplished.

We learn on the title track that the acronym of the EP is “Lost Optimism Suicidal Thoughts”. Although lyrically simple, it still paints a clear picture of the pain and anguish of a defeated soul. Anyone who’s ever found it difficult to look in a mirror will hear “Disgusted with my face/I’m still lost/In this fucked up race” perhaps a little too clearly.