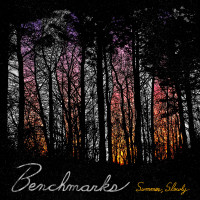 Benchmarks most recent album, Summer, Slowly, may be the most aptly named album of the year. This summer has felt like it was crawling by and also moving way fast than any summer in my life. Maybe that’s partially being in my mid-thirties, or maybe it’s because there’s nothing to do but somehow not enough time to do it all in. This album isn’t going to be the soundtrack to my summer. But, it has certainly felt like a great accompaniment to some of the plaintive moments I’ve found myself in this year.

Musically, this album fits nicely into the indie rock category. It has small touches of punk energy in the rhythm section from time to time and the occasional distorted guitar. Instead of bringing the album more into the punk realm though, they almost serve as reminders of a punk past. Which is fitting given the album tackles nostalgia, regret, and navigating the present with all the baggage and advantages the experiences of youth have provided you with.

Song like “Our Finest Hour” deal touch on thoughts about one’s mortality, personal progress, and struggles with and for something resembling spirituality. That isn’t to say it ever feels like an undercover Christian rock band. Rather, trying to make sense of the world and everything in it within your own worldview. Elsewhere, Todd Farrell Jr. looks back at the more haunting parts of youth, with songs like “Wolves at Our Door” and “Six One Way.” It does without the, at times, overtly poetic leanings of bands like The Good Life. Which, while I love lyrical complexities, is comforting at times too as it makes the songs more relatable.

When it comes to albums fitting into periods of life, I have found there are plenty of bands writing about their early twenties, and all the things that come with that. You also find musicians who are in their fifties and sixties looking back at those times too make sense of them, while also grappling with death being closer to them than birth. There aren’t a lot of albums, for people in their thirties. This isn’t shocking, after all writing about settling down, getting married, and having kids isn’t exciting fodder for songs. In fact it sounds a lot like a diary written about domestication. This album does a good job of filling that gap though. It has the looks back at the past, the moments of yearning for them not to be the past, being grateful for the present, being terrified for the responsibility that comes with it, and wondering if this would have all been easier if you’d done things differently just a few years ago. It’s not a perfect album, but it’s a good album. And, in 2020, I feel like something being good is all we can hope for.