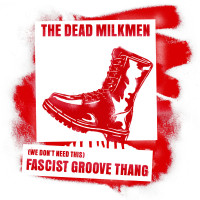 The Dead Milkmen have always been a political band, but they usually hide their political statement in a sly or sick humor – “Stuart,” “Watching Scotty Die,” “Right Wing Pigeons,” “Beach Party Vietnam.” So, it’s nice that their first proper strike in a few years (they did quietly release a new single on a tape comp earlier this year) is a direct blast towards the mania of 2020. It’s also nice that, while their new two song cutter is a political slash, it’s also kind of funny. The Dead Milkmen are one of the few punk bands that know that political discourse doesn’t have to be delivered in the form of a screamed rant- Instead, they know that political conversation can be delivered in the form of a party, and honestly, parties probably change people’s minds more often than dour poli-sci classes.

A-Side is a heavily reworked cover of Heaven 17’s “(We don’t need) This Fascist Groove Thing”. (They’ve been playing the tune live for a few years now). The original goes way back to 1981, but it’s telling that the lyrics fit this year to a T. The fun part here is that while Heaven 17 were synth-poppers that were marketed as a bunch of smooth, cool dudes, the Milkmen are four goofballs. So, their take on the dance hit is decidedly wackier and decidedly more fun. The band merges the electronic aspect of the original with their own ring-y, punk attack.

Rodney Anonymous delivers the vocals in rapid fire, snapping them out in machine gun style more than singing. Meanwhile, the rest of the band starts with a take on the dance version before warping it into a semi-ska jam. It is fun. Joe Jack Talcum’s guitar bops with a certain joy, despite the fact that the song is about standing up to deadly reactionaries. Drummer Dean Clean keeps the two-tone element skipping along while bassist Dandrew delivers bass that is more akin to rockers reggae sped up than it is dance or even funk. The point is, the band hides a message of defiance and independent thought behind an extremely catchy beat which speaks to the body and not the mind. As George Clinton says, “Free your ass and your mind will follow” and the DMs use that strategy to great effect.

The flipside is somewhat more akin to Anonymous’ band 7th Victim than a standard Dead Milkmen track. A synth based number, Anonymous uses the ominous melody of groups like Depeche Mode and New Order. Interestingly, the track seems to be surprisingly earnest. Rodney likes to put his message between wry jokes and sarcasm, but here, he seems to be taking the role of a contemplative wonderer, rather than the jester out to ridicule. It’s a new turn for the band and serves as a moving counterpoint to the joyful bounce of the A-side.

Throughout their career, the Dead Milkmen have pushed back against definitions placed against them- on Facebook, certain members, when given praise for their past accomplishments, are as likely to tell you to go listen to some new band as they are to say “thanks.” The new 7-inch is a good argument as to why the band’s perspective is the correct one. Also, it’s fun to dance to.