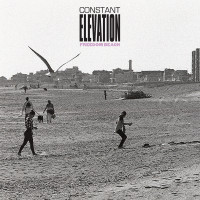 I ended up my review of Constant Elevation’s debut release hoping its short 7-minute runtime and straightforward youth crew styled hardcore was a sign of things to come. The release brought together punk rock luminaries Vinnie Caruana and Simmy Siegler in one band to explore the roots of their humble beginnings in NYC’s local hardcore scene. One year later, and in tow with three new members including Mikey Ireland from I Am The Avalanche, Jim Carrol of Suicide Note and American Nightmare fame, and Jani Zubkovs of Caspian, the band made good on that inclination with a stellar follow up in Freedom Beach.

Released appropriately again on Revelation Records, Freedom Beach is an even tighter yet more ambition version of Constant Elevation. Once again, the band doesn’t waste a second of this 6 and half minute release mixing posi-core, mosh parts, and Caruana’s immediately recognizable vocals. Freedom Beach finds the singer settling even more into the band’s hardcore leanings demonstrating a greater ability to meet the songs where they are at and intersperse creative vocal patterns into the carnage. Opener “I Love You and I Never Want You to Die” has Caruana spitting growls over blast beats before hollering the song’s final clarion call, “Always growing stronger / Constant elevation!!”

The expanded lineup pays off in spades on with the release clearly benefiting from collective experience of all its players. “Bob X. Cursion” is a sneering double-time punk song that has Constant Elevation capable of stopping on a dime to mix in quick soaring choruses and a tough as nails breakdown. The band very competently builds on Sielger’s drum fills in the two step parts throughout the songs. “Krs Two” and “Freedom Beach” go off with these explosions giving the listener a feeling of teetering on the edge of falling apart as the band makes it to the end in one piece.

It would be hard to overpass the short runtime of this release, but Freedom Beach accomplishes everything it needs to in the allotted time. This is a bunch of veteran players connecting with their love of the music they cut their teeth on and it continues to show.

The Stooges: Live at Goose Lake