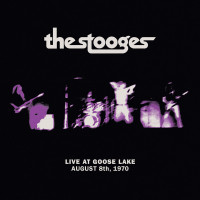 As an artifact, Live at Goose Lake is priceless: arguably the world’s greatest rock band, playing what is arguably the world’s greatest rock album in full, at what could be considered the “Record release show” for said album, at what will be the final show featuring the original lineup of said band. Having recently released the seminal Fun House album, the Stooges were looking to wow the audience with their new fully formed release at the Goose Lake Park Festival, which was headlined by Savoy Brown, Jethro Tull, and Joe Cocker. (The Stooges are billed 15th in line, sandwiched between the James Gang and John Drake Shake- semi-brother band Alice Cooper is four slots higher and brother band MC5 are nowhere to be seen, interestingly).

The Stooges set itself is of course notable for finding the band playing their second LP masterpiece in full, with “Loose” and “Down on the Street” flip-flopped from the album tracklist, thereby lending credence that the studio heads at Elekra did indeed slightly shuffle the album’s original tracklist. Perhaps, the show is more important because it’s the last time the original Stooges ever played a show. Bassist Dave Alexander was fried directly after the show by Iggy Pop for being too zagged out to play. (He actually does make sonic appearances on this live album, but being that it’s somewhat muddied, his proficiency is debatable).

So, with such a seminal moment in time, it’s amazing that someone had to the foresight to hit the record button (how often is band #15 recorded on a bill?) and it’s equally interesting that with the legion of shoddy semi-legit Stooges live recordings, this one managed to stay in the vault for so long.

With the “importance” of the album being cemented, we can all rest knowing that archivists will forever guard this gem for the education and record of future generations. Now, that that’s settled, the bigger question is, “is it actually any good, especially since Alexander was reportedly whomped out and considering that the O.G. Stooges were in a constant state of dishevelment?”

Well, for one thing, it’s a hell of a lot better than most of the boot and semi-boot live Stooges releases out there. The offenders know who they are. That being said, this is a soundboard recording, but not a professional one, so the sonic quality rates mostly at the “very good for a boot” level. The record also demonstrates just how freaking ahead of the time the Stooges where. While Joe Cocker was singing about getting help from his friends, and while Savoy Brown was doing gentle covers of Muddy Waters, and while Jethro Tull was playing a flute, the Stooges were smashing down with ten ton guitars, cracking skulls with freight trains drums, and growling in demonic voices about taking pretty music and “putting it to you straight from hell.”

Honestly, it all sounds rad, and it mostly is, except… well, on the first half of the album, the band is not as jacked up as they are on the studio recording and they are not as jacked up as they were for their insanely good reunion shows. Maybe the soundboard is to blame, maybe the mid-day sun is to blame, maybe Dave Alexander really is to blame, but, while the band sounds surprisingly competent as they make their way through Side A of the famous album, they don’t sound as combustible or as monstrous as we have come to expect. As usual, Iggy shouts out bizarre, off kilter asides throughout songs. As usual, Scott Asheton and Ron Asheton lock together, and it all sounds pretty good, but it sounds like a band playing their songs in a live setting. And of course, it is a band playing their songs in a live setting, except, with the Stooges, due to their hallowed reputation (and well documented live evidence) we expect more than a live show, we expect destruction or chaos or fire or a disaster. Side A doesn’t really have any of that. In a way, that’s a relief as this particular show was rumored to be absolutely terrible (it’s not). But, it’s also a disappointment in that the first half is neither sublime or sheer waste-zone. (Aside from maybe “T.V. Eye that finds Iggy screaming about ramming walls while the security guards literally fight to hold him back from stage diving). No doubt, as Iggy growls and as Ron Asheton twists out demon-blues licks, the band stands far out from pretty much every band on the bill a something wicked and savage (with maybe Alice Cooper out there as well). But, at the end of Side A, as the band wraps up "Dirt," they sound like a great band playing songs in a live setting.

Then, almost meta-contextually, the band blasts to life once you flip the record over. Side B, which features contributions from saxophonist Steve Mackaye, ignites right away. This is the band we were hoping for. The band plays with speed and force that exceed the studio recordings, with a bit more pandemonium and looseness. By the time the band smashes into the noise blast “L.A. Blues”, it sounds like a bland exploding in a blast of fury and frustration. It is here the Stooges prove why they so readily deserve their station. There is furor and menace and savagery far beyond the Blues rock of the day, and more importantly, true danger. The band is standing on the edge here and it is equal parts frightening and exciting.

As a time capsule, Live at Goose Lake documents and cements the legacy of the Stooges. No one really questioned this, mind you, but it’s nice to have even more evidence to show that the praises heaped on this band aren’t supported by fandom as much as they are supported by white, hot recorded proof.