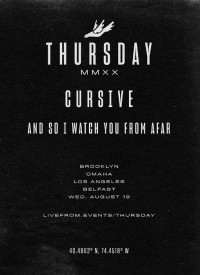 It's no secret I'm one of the biggest Thursday fanboys there is. So whenever they call it 'quits' and then reunite, most of the time, I travel from the Caribbean to the US to catch a couple shows. COVID-19 has certainly fucked that plan but nonetheless, this month saw the band record a live set with proceeds going to social justice charities. And it's definitely one of the best live shows I've watched, because with the 360-view and high quality of the stream, this feed is something I think big-name bands can capitalise on for a truly cinematic experience.

Music-wise, Thursday bang out the hits, without Tom Keeley who's been replaced by My Chemical Romance's Frank Iero for this show. It's interesting but fellow guitarist Steve Pedulla perfectly compensates on the screamo parts, although I do feel keyboardist Andrew Everding would have helped add some punch with his screams as well. Off the cuff, songs like "The Other Side of the Crash", "For the Workforce, Drowning" and "Cross Out The Eyes" hit you like a bucket of cold water, truly reminding fans what they're missing. Next month would have seen both MCR and Thursday, lifelong buddies, wreaking havoc at Riot Fest, so this does act as a decent enough stopgap, especially for those who need their fix like me.

But I'll admit, I've heard these songs live so many times, I wanted some B-sides such as "Even the Sand is Made of Seashells", the Sigur Ros cover of "NY Batteri" or tracks that don't get live love like "Running From The Rain," "Magnets Caught In A Metal Heart", "Streaks in the Sky" and "Concealer" etc. At this point, I'm hoping V.2 either does these rarities or they go album by album with guests. That said, it's still such a rollicking ride listening to Geoff Rickly on "Signals Over the Air", "Steps Ascending" and acoustics like "This Song is Brought to You By a Falling Bomb". Geoff's improved as the years went by on the mic and while he's not fully up to par here, these stripped down songs accentuate his vocal talents so well. "Love Has Led Us Astray" and "Time's Arrow" serve as further bare interludes that do well to mix up Thursday's sound and show how diverse their records are, all backed by a topnotch production.

The show winds down with "Jet Black New Year" -- requested by Frank, and P.S. I wish Gerard Way were on this as it's a song he loves to rock out on with backing vocals. Then there's "War All The Time", "Understanding (In a Car Crash)" and lastly, "Turnpike Divides" to send you off. Well engineered and they don't miss a beat, at all. Lastly, the credits focus on an old performance on "Autobiography of a Nation" but it's a solid one and timely given the xenophobia permeating in the world today, especially with how white supremacy seems to still ignore bloodshed and colonisation. It's a fitting point, especially as you can see the Black Lives Matter props in the background behind Steve, reminding me of Thursday's speeches live on love, acceptance and equality -- especially with immigrants and the LGBT community. And so, while they might not be Rage Against the Machine, I personally think the world needs more Thursday right now, whether if from a live feed or pre-recorded, to remind us all that there are indeed "enough love songs in the sky."

The Stooges: Live at Goose Lake