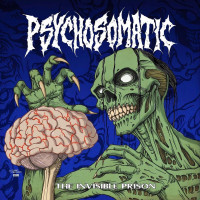 Psychosomatic formed in Sacramento in 1988, about the same time I was really getting into thrash. Somehow, I’m only just learning of them now, 32 years later, on their 7th full length, The Invisible Prison. Better late than never, I suppose. Especially when it comes to finding a band playing traditional, neck wrecking thrash, without being younger guys doing a retro thing. (Not that there’s anything wrong with that!) Psychosomatic are the real deal in the vein of Slayer, Exodus and Hirax.

The Invisible Prison is a dozen thrash songs that also incorporate elements of punk and death metal. “We Don’t Trust You” with its cool “Symptom of the Universe” riff, and the rapid fire speed metal of “Riot Squadron” are a great one-two punch to start things off. I’m generally more drawn toward their shouted, chugging crossover type songs. Fans of bands like D.R.I. and M.O.D. should take note. The death metal vocals on “Fortune Dealer” and the title track didn’t do much for me, but the songs were still great. There really isn’t a clunker among the 12 tracks. I especially like the blast beats, gang vocals and cartoon violence of “Serial Killer”.

I’ve got nothing against younger bands like Municipal Waste, Power Trip or Toxic Holocaust that are essentially doing throwback style thrash that’s distilled through an idealized ‘80s filter. (As a matter of fact, I like all of those bands quite a bit.) But still, there’s something about older guys doing this style without a hint of irony. The Invisible Prison is a great find. If you are a thrash fan, it’s time for Psychosomatic to be on your radar.

Kicked In The Teeth: Death Adventure [7-inch]
Go to the review index