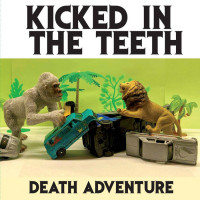 Kicked In The Teeth

Kicked In The Teeth are a relatively new band from the UK who reside in the town Northwich, Chesire. This band is comprised of a quartet of guys in their 30s who formed to simply have fun. Listening to this single, you can easily gather this mission from their influences which they wear on their sleeves. Kicked In The Teeth were raised on a healthy dose of both UK82 and 80s American hardcore. It’s time to lace up your boots and read on.

The A-Side of this single, “Death Adventure,” starts with guttural vocal screams leading into the band going full speed ahead. There are quick tempo changes in the pre-chorus which prevents the song from becoming too repetitive which is an issue I have with many hardcore bands. The chorus circles back to a straight driving tempo. The vocals are a healthy mix of Cal from Discharge and Rat from the Varukers. There is a slight deviation from standard hardcore through the guitar solo in the bridge which pays homage to 80s American punk guitarists East Bay Ray and Greg Ginn.

“Dead Air” follows as the B-Side to this single. This track is more accessible than “Death Adventure” in various ways. The vocals are more audible and coherent in delivery. The track begins with vocals over palm muted guitars. I have always been a fan of this approach, especially in the verses. It sets a nice tone for a powerful chorus. The fists will be pumping in the pit for this one. The bassline is solid and present throughout the track. “Dead Air” has hints of the Exploited and Poison Idea in its ability to pair catchiness with aggression.

This single is a good representation to what Kicked In The Teeth have to offer. You can gauge from these tracks that the band formed to pay homage to their favorite bands. Both tracks clock in at less than three minutes each which makes for a quick and fun listen. These guys sure do pack a punch in a short period of time while incorporating the best of UK and American hardcore. Some might call this nostalgia. For others, Kicked In Their Teeth may restore their faith in the genre.

Bright Eyes: Down in the Weeds, Where the World Once Was