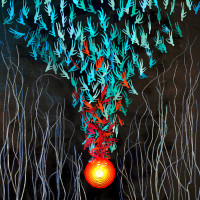 The People’s Key wasn’t a terrible album, but, for the final Bright Eyes release, it was a bit of a weak way to bow out. It could have been a pretty good debut album, but with all that we knew Bright Eyes to be capable of over the course of their career, The People’s Key paled in comparison. It’s why, even though Bright Eyes broke up in 2011 and Conor Oberst embarked on a solo career, alongside a number of side projects, I always got the feeling that, someday, Bright Eyes would have to reform for no other reason than to produce a better farewell album. If that’s what Down in the Weeds, Where the World Once Was is intended to be, it was an unqualified success. And, while picking a best Bright Eyes album amongst eight albums (excluding the Christmas album and the early recordings) each with a very unique personality meaning that all eight are great for different reasons, Down in the Weeds… is a strong contender for Bright Eyes’ best album.

One of the main criticisms that I hear about Bright Eyes is that every album has a pointless abstract introduction that most people skip past (with the possible exception of “At the Bottom of Everything” off I’m Wide Awake, It’s Morning, but the opening track on Down in the Weeds…, as bizarre as it is, is worth not skipping. The album begins with a voice welcoming you this evening, in Spanish but with a little English, and asking you to invite to the stage your most vivid nightmares performing their newest composition, “Pageturners Rag.” What follows starts out as a traditional rag before breaking down into dark mood music as snippets of conversation flit in and out like ghosts. It’s an interesting sound experiment more so than it is a song, but it serves as a gradual mood setter and delays your gratification for the long awaited return of Bright Eyes after nine years, so that when Oberst triumphantly returns in “Dance and Sing” with his typical emo-Dylan style lyrics and folksy guitar and banjo as he declares “It’s a long time coming and we’re taking it in” the listener can only respond “It certainly is!” Down in the Weeds, Where the World Once Was doesn’t sound like any other Bright Eyes album—arguably no two Bright Eyes albums truly sound alike—but it still manages to be the culmination of all their previous albums, with heavy amounts of Digital Ash and The People’s Key’s slick electronic pop sensibilities and moments of Cassadega folk-country soul. At times it has Fevers and Mirrors darkness, but it usually gives way to I’m Wide Awake, It’s Morning’s twisted optimism.

“Down in the Weeds…” is an excellent album that rests on Oberst’s transcedent talent for both lyrics and musical compositions. But, contrary to popular belief—as well as a viral tweet that’s gone around saying “2020 is so depressing Bright Eyes felt the need to put out new music”—I think the idea that Bright Eyes is nothing but a sad, depressing emo band is far from deserved. Perhaps it was truer on the band’s earliest albums, but for a long time now Bright Eyes’ music is just as commonly hopeful and upbeat as it is depressing. And on Down in the Weeds… I’d say that the joy outweighs the sadness, at least musically. The album’s biggest highlight, the refined pop song, “Mariana Trench” is laden with slick hooks and an infectious rhythm that you’ll be singing along to all day. “Pan and Broom” is a bright pop song with some simple keyboards and artificial drum beats that really bring out the song’s beautiful melody. “Tilt-A-Whirl” and “Forced Convalescence” have a bright catchy beat that belies the cynicism of the lyrics. And speaking of great melodies, the penultimate track, the acoustic-driven “Calais to Dover” pulls in some unique instrumentation to pull off one of the album’s best melodies. Even some of the songs that start off dark, like “One and Done” and the drearily titled “To Death’s Heart (In Three Parts)” have their moments of hope and light.

I don’t know if the reformation of Bright Eyes is just a one-and-done, if you will, putting out one album before disbanding once again, or if this marks a new beginning to the band’s career with a slew of new releases in the future. Conor Oberst is one of the most talented lyricists in music today and his musical compositions are always dynamic and original, which is why another Bright Eyes breakup might be bearable since we’ll still get Oberst’s solo project as well as his side projects, like Desaparecidos and Better Oblivion Community Center, all of which are excellent. But, as talented as Oberst is on his own, his symbiotic relationship with the other members of Bright Eyes makes it easily Oberst’s best project and one I hope continues on for the foreseeable future.

The Front Bottoms: In Sickness & In Flames