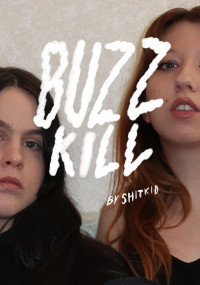 Following a few successful shows together, in 2019, the Melvins and Shitkid decided to release a collaborative EP in line with the Melvins string of collabs with Flipper, Redd Kross, Mudhoney, and others. The EP was an excellent release that included a Pretenders cover and a song so good it literally could have been a Sex Pistols track. Also, the Melvins were slated to take Shitkid on a full USA tour, which was a good bump for the Swedish band that wasn’t very well known in the states. It all seemed like a wonderful dream until suddenly, it was announced that Shitkid would not be on the tour with the Melvins (replaced by Toshi Kasai). After that, Shitkid urged people not to buy the 10-inch EP. What happened?

Buzzkill, the zine released by Shitkid this year, seeks to tell that story by reproducing texts between the Shitkid and Melvins’ Buzz Osborne as well as a few e-mails and Instagram DMs. Being that Shitkid closes the zine with the statement “Buzz is a hole in a huge ass,” it seems the band is trying to show that the Melvins are totally jerks. The zine doesn’t prove this at all… and it doesn’t really prove that Shitkid are jerks either. What it does do, however, is present an interesting question about art, censorship, and feminism in 2020.

As the zine reveals early on, the conflict between Shitkid and the Melvins arose when the Melvins posted a promotional image that was a drawing of a nude woman in a ‘70s Playboy pose. The face of the nude woman was a grotesque, distorted clown face. Next to the image were simply the words “melvins/shitkid.” It may be important to note that the image was not the album cover, but rather, an advertisement for the EP.

As soon as the image went up, Shitkid contacted Osborne demanding it to be taken down and replaced with an image of a nude man as the nude woman was in conflict with the band’s feminist platform. Interestingly, Osborne seems to have no problem with this suggestion, but then he points out that the image was drawn by Veronica Hazelmeyer (a woman) without any direction as to content form the band- that is, the Melvins said “give us a picture” and a nude woman with a distorted clown face is what they got.

What follows is an interesting verbal battle that spanned the course of a few days. Shitkid takes the position that as women and artists, they should have a say in the promotional images used in connection with their band. Osborne takes the position that it would be anti-feminist of him to tell a woman that her drawings are not appropriate. He also argues that the distorted clown face gives the image a deeper complexity than just being a hot lady to look at.

Throughout the zine, the issue seems settled multiple times only for one party to get in one last jab, which reignites the whole thing time and time again. If, when requested to replace the image with a nude man, and after Osborne agreed to change the image, if everyone played it cool, things probably would have been settled. But after Osborne agrees to have a naked man image made, Shitkid then states that they want the man to look as man should look just as the woman image portrayed a woman as a "woman should look." Seeing an opportunity to counter back, Osbrone questions what exactly a woman "should" look like and implies that to assume a woman "should" look any one way is sexist. On the upswing, he then continues to point out that he thinks Shitkid is wrong in their analysis of the image. Later, when it’s once again settled, Shitkid, somewhat out of the blue, calls the Melvins “old men,” and themselves ”young women,” which also interestingly, appears to get under Osborne’s skin. In true punk-subversion style, the Melvins called special editions of the EP Old men and young women.

There’s no clear winner in the battle here, but there isn’t really a loser either. Both bands come off as intelligent with questions, that in 2020, might not even have an answer. Also interestingly, where a more Solomonic person probably could have smoothed the matter over, both sides are as equally interested in resolving the issue as they are winning the fight, which of course, splits the baby in two, leaving it dead for both parties.

Really, the zine is a curio as it doesn’t really add much to the art of either party here. What it does do, however, is show that both bands are intelligent and able to engage in high level debate (mostly without resorting to insults), and it also shows that both parties won’t back down if they think they are right, even if that sacrifices the end goal. In fact, you could argue that these text messages reveal as much about the parties here as does their music. It’s also interesting that after bouncing back and forth between the battle, I like both bands even more.

The Front Bottoms: In Sickness & In Flames