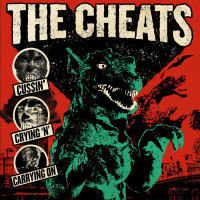 If you like sleazy, greasy punk and roll, and you should, The Cheats are the band for you. Since 2001, various lineups of the Pittsburgh quintet have been cranking out high octane punk in the tradition of Dead Boys, Motӧrhead, New York Dolls and Johnny Thunders and the Heartbreakers. They’re fronted by Todd Cheat, who notably sang for the late ‘80s/early ‘90s crossover thrash band Eviction. (They made a record called The World Is Hours Away in 1990 for Metal Blade.) Later in the ‘90s, he howled for the Motӧrhead and AC/DC inspired punk hard rockers Silver Tongued Devil.

Cussin’ Crying ‘N’ Carrying On is The Cheats’ 4th album, and strongest to date. It’s also their first full length on vinyl. The title might sound like something from a lost Geogre Jones album, but it was actually borrowed from an Ike and Tina Turner song. To make matters even more confusing, they look like a biker gang. Still, these 13 tracks make up the rare album that should appeal to fans of both the Sex Pistols and Guns N’ Roses.

The Cheats’ songs tend to fall into one of two categories. First, there are the “crying” songs about heartbreak and lost love. Or dumping and getting dumped. “Give Up the Ghost”, “Got Lucky”, “Lil Timebomb”, “Hella 69” and the record’s emotional centerpiece, “Stabbed in the Heart” are examples of this. Other songs are more like cautionary tales about fast women. “Too Much Too Late” (likely a New York Dolls reference) and “Lookin’ So Tough” (“In her Joan Jett cut/Struttin’ her stuff”) and “I’m the One She Loves to Hate” fit in this category.

The Cheats also know how to keep it fun. This is evident in their “carrying on” songs. (As for the “cussin’”, a lot of the songs have that!) “Rock and Roll Life”, “F.D.F.” (fuck, drink, fight), “Empty Pockets” (about friends dying from addiction) and “Take No Prisoners” (about betrayal) chronicle The Cheats’ hard living and bad behavior. “It’s Alright” channels and puts a modern twist on the Ramones classic “We’re a Happy Family”. Overall, there’s a nice musical variety between the songs.

A song like “F.D.F.” might seem a little juvenile, but that might be just what the world needs in 2020. Too many modern “punk” bands are all “C.H.C.” (cry, hug, cuddle). It’s refreshing to hear a band that taps into the rebelliousness, and even recklessness, of early punk. Those same modern “punk” bands seem to be apologizing for their very existence. The Cheats contrast that with a swagger and fuck you attitude. Cussin’ Crying ‘N’ Carrying On is easily one of the best punk records of this shitshow of a year.

Bi-Product: Gun To A Knife Fight