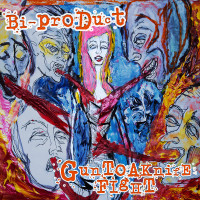 Bi-Product succeed because they leave me somewhat confused. On their debut Gun to a knife fight, the band’s sound is based in equal parts early West Coast punk and ‘90s grunge. If Rhino39 and Hole joined up, it would sound a lot like this. Intro track, “Up my skirt,” finds singer Liv Roush spitting at pervs at the mall to a mega-catchy riff that is pretty much as good as the riffs found on the classic dangerous house singles. Meanwhile, on “Selfish Girl,” the topic of the track is presented as a spiraling mess, exploding in across a range of emotion while the band drops out crunchy-style riffs that would make Hole jealous.

For the most part, the release ping pongs between these two energetic stomps. Liv herself is an interesting character- at one point she’s slashing out at skeeves at sticking up for herself and at others, like on “2 A.M.”, she’s beating up on herself for making stupid choices. She’s not scared to present herself as a full human- with strengths and weakness- and that makes us interested in her ups and down here. She’s not presented a paragon of one virtue or another, and in a way, certain virtues -self reliance, self care, for example- are thereby saluted here.

With that recipe, the band has the fine starting for being a very good modern punk band. But, to their credit, once they establish their skill, they start to take risks- and kudos to them for that. Album centerpiece is “I got raped” is an unpleasant piece- purposefully so. While the band twists out discordant feedback, Liv hisses “I got raped just to win an argument/ I got raped because I started it… I got raped to smear his reputation/I got raped for his humiliation.” It’s a difficult track to parse and the message is somewhat unclear. It’s not fun. It doesn’t rock. And that’s the point- in the middle of a bunch of catchy tracks, this fearsome horrorshow comes and forces the listener to work through a difficult, and very real truth, about the modern world. I’d guess that Liv is echoing how raped victims sometimes blame themselves… but maybe that’s entirely the point. Good art isn’t always pleasant and it isn’t even always clear- and that’s the difficult, but intriguing statement here.

What makes the release somewhat more challenging is that the next track is the poppy-ish “get out of my butt”, which includes the lines “There’s on more nothing I’d like to say, I’ve had enough of your shit today, I’m fucked up and that’s okay, get out of my butt, get away!” To have this song, which is a silly-ish song about annoyance with a silly-ish refrain to follow the terror-black of “I got raped” confused me, and maybe that’s the point.

I’m not exactly what to do with Gun to a knife fight. For the most part it rocks and when it doesn’t it verges into uncomfortable, but raw artistic statement. The band takes some risks here and most pay off. If art is making you feel uneasy, it’s probably doing something right.