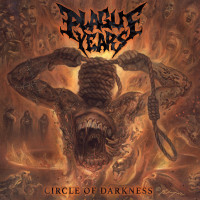 I’m just going to come out and say it. Listening to this record is a bittersweet process at the moment. The recent passing of Riley Gale and Wade Allison has left the heavy music community reeling. Both seemingly universally liked men, brimming with goodwill, talent and passion, I know I wasn’t the only person to feel the keen sting of injustice more with these than most other deaths. On a personal level, Riley especially. I won’t linger on the subject save to say that it is difficult to listen to Plague Years without hearing the influence of Power Trip and Iron Age quite tangibly. The thrash scene is a funny place sometimes. Populated by a combination of nostalgia-chasers, borderline cosplayers and the resurgent breed; those who love thrash, believe it to be an enduring art form and one that still has progression to show and possibly it’s best fruit yet to bear. Riley and Wade’s projects were/are some of those voices. Authentic, forward-facing and beloved of almost all corners of the metal and hardcore communities for it. So given that Plague Years have a similar sound and characteristics, does that make them an exciting proposition, or is their debut record dropping at a distinctly ill-fated time?

Digging a little deeper into Plague Year’s sound, there are aspects here that separate them from their crossover peers. There is a classic heavy metal, sacrilegious feel that’s apparent in some of the lead lines, the song names and thematically in general. There are also tom rolls in the drums that hark to stadium thrashers of years gone by and 4/4 stomp sections that bring a classic metal/hardcore fusion to the table that not many other bands do as well. I’ve seen Plague Years described as blackened thrash, which although I don’t agree with, I can almost see where that’s coming from. There aren’t any blast beats to speak of, and the vocal approach is certainly not what I would describe as blackened, but there are tinges of Nordic influence here and there. Personally, I would draw a dotted line more towards the Floridian death metal scene than anything Norwegian in origin. The thudding, grinding approach to some of the slower sections as well as the imagery of the band, feel far more Obituary than they do Mayhem or Immortal. Vocalist Tim Engelhardt’s strained roar also seems to take cues more directly from the early 90’s (again Obituary, as well as Sepultura, Iron Age, etc) as opposed to what’s more typical in the modern extreme genres (i.e. completely unintelligible). So despite being forward facing in their approach, there are plenty of nods to what has come before in Plague Years’ music.

In terms of structure and style, I do think that the band could possibly show a little more variation in some instances. The main riff in “eternal fire” varies very little for most of the song’s 5 minute runtime, for example. Also, Engelhardt’s vocal lacks a little range, it could be argued. In truth, the record doesn’t have a huge dynamic range throughout. It’s not a debilitating issue though, as there is consistent, tangible drive and energy to the songs. The title track especially makes me grit my teeth and ball my fists every time I hear it. Some tracks have this quality more so than others admittedly, but even at its most blindly stomping, it has that knuckle-dragging, deathy quality to it that I find kind of irresistible. It feels like even when it’s being bone-headed, it’s doing it entirely intentionally and because it wants to; and that’s incredibly important. All too many times I listen to a chugging hardcore or death metal record that simply feels like they don’t have the ideas to broaden the songs out but I certainly don’t believe that’s the case with Plague Years. Another reason it can put you in mind of Power Trip or Iron Age is the production job. Arthur Rizk (who was responsible for producing Power Trip and Iron Age records amongst other standout heavy releases of recent years such as Code Orange’s Forever and Tomb Mold’s Manor Of Infinite Forms) was behind the desk for Circle of Darkness and has done another exemplary job. Crunchingly metallic with dirt under its fingernails, but just enough clarity to make the riffing sound satisfyingly precise and cutting.

In the end, I think this is a great debut record. It is hard to be completely objective and dispassionate for the reasons I mentioned above, but I think in the most balanced light we have a band here who show a huge amount of promise, aren’t dangerously close in sound to any single one of their peers or forebears, and ultimately who have produced a record of real quality with nods to classic metal, thrash, hardcore, death and more besides. As a result it does have the feeling of having something for everybody. Not everyone is going to love it and I think future releases could benefit from some experimentation with their sound, but if you like big, fuck-off thrash riffs delivered with a sledgehammer production job and plenty of metal gusto and aesthetic, then you’ll find more than a little in here for you. And if like many of us, you’re still hurting from recent events, then this record just goes to show that there are more bands waiting in the wings to carry the torch. And if releasing a record like this isn’t a good way to pay respect to two legends of the game, then I don’t know what is.