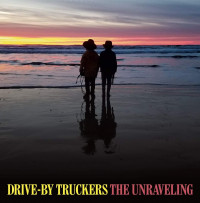 On their last album, American Band, Drive-By Truckers were angry. They tackled the ills the saw in America, and they did so without fear of losing members of their fan base, who were either able to ignore the band’s progressive politics on prior albums or just didn’t notice them. But, American Band found them touching on issues more directly than they had before across an entire album. It was also, in my mind, the strongest album they’d recorded since Brighter than Creation’s Dark almost a decade earlier.

The Unraveling finds principle songwriters, Patterson Hood and Mike Cooley, still living in that same head space. But, they don’t sound as angry anymore. This album, to jump to the world of cinema, reminds me John Coffey’s line in the film adaptation of The Green Mile. It’s like the whole album is them saying, “Boss, I’m tired.” This album resonates with fatigue, fatigue for a world that hadn’t improved in the four years since their last album; and you can hear it in the songs. The band sounds tired.

The first few times I listened to this album, the vast majority of it didn’t resonate with me. It was early 2020, and the longest year of my life hadn’t even gotten its shoes tied yet. I think this lead to me putting the album on the back burner, despite coming back to often, when it came to actually writing how it made me feel. Now it’s September and the fatigue the album has throughout it has gone from being something that made me discount it, to something that feels like home.

The one track that did stick with me, from the first listen, was “Thoughts and Prayers”. While songs speaking out against gun violence are as common as they are relevant these days. The song hit my ears less than six months after a mass shooting in my hometown. And the when Patterson Hood sang, “Stick it up your ass, with your useless thoughts and prayers,” it was a relatable lyric. It was relatable for reasons that are terrible, and will always remain so. But, if the goal of a songwriter is to write something the listener can relate to, the song was a success.

In all honesty, this album succeeds lyrically more often than not. “21st Century USA” isn’t so much a protest song, as it is a depiction of life in smaller cities all across America. The song makes its point not by engaging in a refrain or sloganeering. Rather it utilizes the talents of the band at capturing people, times, and places and making it relatable. Even if someone lives in a large city, they know the smaller one an hour or so away where the industry is gone and life is way rougher than it should be. This may actually be one of the few songs on the album where it would resonate with liberal and conservative listeners, because despite them disagreeing on the causes and solutions to the problems the song depicts. Both listeners know someone in a city like that, and they know that those are problems.

The band deal with immigration policy being put into action under the current administration on “Babies in Cages,” tries to wrap its head around the ongoing opiate epidemic on “Heroin Again,” and just deals with the general chaos of current daily existence on songs like “Armageddon’s Back in Town” and album closer “Awaiting Resurrection”.

Where this album really seems to fall of track, a bit, is on the instrumental sections between verses or after choruses. While the band hasn’t had three full time guitarists for their last several albums, this was the first time it seemed like their fully developed songs suffered because of it.

There’s no doubt in my mind, that Patterson Hood and Mike Cooley are two of the better songwriters in music today. And the core songs on this album are great, I’ve heard stripped down versions of them over the course of the year and the songwriting is unimpeachable. But, these songs suffer from the full band arrangements not always adding to the songs. It’s, in all likelihood, unfair of me to say an additional guitarist would have remedied that. John Kneff was a phenomenal guitarist and you can still feel the void a player of his caliber could fill in the band. Prior to him, Jason Isbell was the third guitarist and an emerging songwriter before his personal struggles lead to him and the band parting ways.

This is a good album, but it’s one of those albums that either has too much or too little of something. Where the band sounded angry before they sound tired and worn down now, while that fits perfectly within the current year’s vibe. It keeps this album from living up to the high standards this band has set for itself on previous albums. If you already dig the band, it’s absolutely worth your time. But, if you are looking to check them out for the first time go back a ways in their discography, this album will still be here later. And I dare say you’ll appreciate it more.