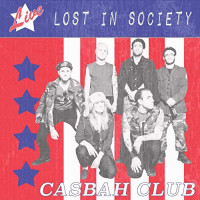 Lost In Society’s recent release Casbah Club was a long-shelved project of Clash covers that was likely brought back to life thanks to the current excess of time on people’s hands. The Jersey rockers put their spin on three signature tunes by The Only Band That Matters, and released it to coincide with the late Joe Strummer’s birthday.

They open with “Police On My Back”, a song whose relevance becomes more distinct with each passing year. The original first appeared on the extravagant Sandinista!, with its flourishing production and dub glory. Lost In Society strips much of this away, and although it is a faithful cover, the purer punk energy on this version begs the question of whether London Calling or The Clash would have been a better home for the original.

I wish I could say the same concept worked as well on their version of “Rock the Casbah”. The original was a funky dancehall number in the midst of a mostly basic rock album. The verses were slow and groovy, it was mixed beautifully, and just had a great dub-rock soul to it. LIS somehow missed the bus on this one. They speed the song up which, with intention noted, takes out all the character of the original. Most of the meticulous textures that gave the song its weight are gone too. They’re replaced only by an overdriven guitar positioned awkwardly and unnaturally in the mix; so much so, in fact, that it becomes an ear worm of a distraction.

Finally we have “Death or Glory”. Once again, LIS go a little mucky with the guitar work here. The overdrive sound is a stark contradiction to the pure tone that the original had, although it’s certainly not as much of an issue here as it is on “Rock the Casbah”. Adding your own touch is much better to do on a cover than insulting the source. The guitar sounds good here, but it’s at the expense of the bass. The hallmark bass lines get buried beneath all of the fuzz, and it’s a regrettably missed element. Still, the song manages to hold itself together, thanks in no small part to the best vocals on the record.