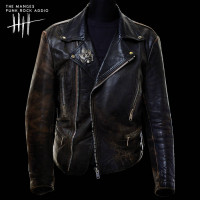 The year 2020 has not ceased to amaze the world with surprises. The pop punk world has been no exception. Back in March, Screeching Weasel surprised us all with an announcement and subsequent release of their new album Some Freaks of Atavism. Ramonescore enthusiasts rejoiced later this year when in August, Italian punk rock veterans the Manges announced their 5th studio release, entitled Punk Rock Addio. Many Americans were initially introduced to the band when Screeching Weasel covered their classic “I Will Always Do” on their Teen Punks In Heat album. The Manges continue their storied career with this collection of songs paying homage to both Italian and American culture through catchy harmonies and well-crafted downstroke riffage.

The Manges waste no time kicking off the album with “Next to Zero” at full speed. Quick chord changes hit you like a freight train. The catchy outro to this short but sweet song includes the title repeated multiple times which will make for quite the fist-pumping anthem in a live setting. “Vietnam Addio” starts with an amazing guitar lead, like the Lillingtons. This track showcases the amazing vocal range of Andrea Manges. There are great harmonies throughout accompanied by the backing vocals this band has been known for over the years. “Endless Detention” follows which is the previously released leadoff single. This heavily downstroke driven track pays extreme homage to the Ramones, esp in the outro which will be stuck in your head for days. The next track “Paninaro” sent me straight to Google. At first listen, I thought it was about some cool actor like James Dean. I was close as I found out that a paninaro is a term regarding someone into designer clothing and a luxurious lifestyle. The Manges never fail to paint a good visual with their lyrics. Handclaps and keys enhance the catchiness of this song. The fun straight forward pop-punk track “Ice Capades” follows. “Chinese Dragons” takes you back to those fun 80s Ramones classics with catchy intro guitar leads. This is a fun track with great backing vocals about the Lower East Side of NYC. The USA theme continues with “Viper Room” that sings about the displeasures of the Hollywood party scene. “Tootsie Rolls” is the one outlier on Punk Rock Addio that both musically and lyrically differs from the rest of the album. The Manges take a golden oldie approach on this less serious track, complete with handclaps and keys. The band returns to the heavy rocking on “North Korea” which follows. “Take It On the Chin” is the standout track for me on this album. This is a classic punk rock anthem in every sense of the term. The timing could not be better with the current state of events for a song about accepting whatever comes your way. We are all dealing with life in a new way and this track can help you through such times. The track “L.E.N.D.O.R.M.I.N.” sent me to Google once again. This fun rocker is a song about the drug lendormin which is commonly used to treat insomnia. Like others on the album, the outro repeats and spells out the word which burns in your brain for days. The Manges conclude this new collection of punk rock gems with the steady paced rocker “Off My Tree.”

To quickly summarize, the Manges did not fail to disappoint their fans with this release. What makes an effective album is one that flows well and keeps the listener's interest. No song on this album breaks the three-minute mark. Less than half even break the two-minute mark! This is the type of album that goes by so quick you will never reach for the stop button or lift the needle of the record. The Manges are one of the most consistent bands in the scene. Let’s truly hope that, per the title of the album, the band is NOT saying goodbye to punk rock!

Napalm Death: Throes of Joy in the Jaws of Defeatism