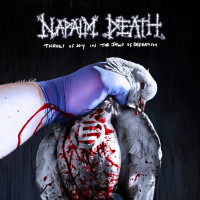 Although none of Napalm Death’s original members remain in their current incarnation, the current lineup has remained (pretty much) consistent for some 28 years at this point. As such, you can argue the toss with purists about what constitutes the ‘classic’ ND lineup, but no-one would argue that some of the group’s strongest output has come from these 4 core members. As you would expect from a band whose history is as long and storied as ND’s, there have predictably been troughs as well as peaks. But now, nearing 40 years from the band’s inception, can we expect fire, fury, innovation and excitement from the gods of grind? I’d say in almost all cases, when a band gets to this stage in their career, then…no, not really. But Napalm Death are not most bands. Thankfully.

TOJITJOD is the band’s 16th studio album and the first since 2015’s critically-acclaimed Apex Predator – Easy Meat. The intervening 5 years is the longest period that the band has left between records, but given their well-documented political views, the world’s current state offers them plenty of opportunity for material, that’s for sure. Shane, Barney and Danny (Mitch plays some parts on the record but wasn’t involved in the writing this time around) are, of course, fascinating socio-political analysts and commentators, and they remain as capable of channelling that into their music as ever they have been. That said, they’re not interested in going after obvious targets or writing songs that are too rudimentary in theme. The band have said that this record is primarily about ‘the other’; treatment and perception of the other, be that in relation to the Black Lives Matter movement, transgender people or general treatment of those of other backgrounds. But within this, the band are able to focus on the positives associated with ‘the other’ as well as raging against the injustice. Just another way that Napalm Death are subverting people’s expectations and continually injecting new life and vitality into their music almost 40 years into the band’s existence.

The album opens at breakneck pace with “Fuck the Factoid”. Two and a half minutes of gargantuan riffs, savage screams, blastbeats, signature grinding bass but also melodramatic synth lines that remind me of some of the electronics in recent Anaal Nathrakh records, but also hark to the 80’s. From there we fly straight into lead single “Backlash Just Because” and it’s clear already that we’re in for another record of unquestionable quality. ND seem, even almost 40 years in, to be able to cram as many ideas into a single song as many bands stretch out over an entire record – or career in some cases. But more so than this, they appear to be less willing to consign themselves to a genre now than ever, which is maybe why they still feel vital today. Across the record you have grindcore, death metal, crust punk, noise (as you’d expect), but huge slabs of groove (that border on doom on occasions), alternative rock, Southern metal and even electronics (more on that in a minute). Production duties again fall to long-time collaborator and friend Russ Russell who does what he’s done for a long time in succeeding in capturing the band’s essence immaculately. They’ve come a long way from Scum in this area as well, suffice to say.

Maybe I was limiting my expectations too much, as I was just hoping for another good ND record in the run-up to this release, but TOJFTJOD is so much more than that. It’s brutal yet full of hooks (the lead riffs in “Invigorating Clutch” and “Fluxing of the Muscle” both as good as anything I’ve heard this year), wildly varied, yet feels at home in each area it veers into. “Amoral” is maybe the most obvious example in this regard, as it delves into a form of 80’s gothic post-punk that is not typical of the band to say the least. Which makes it even harder to believe how well they pull it off. On recent single and album closer “A Bellyful of Salt and Spleen”, they explore more industrial territories; marrying it with their own monolithic sonics and Barney’s disquieting take on a kind of Gregorian chanting vocal, it evokes a Terminator-style apocalyptic dystopia. But then alongside these tracks, you have what could be argued are more typical ‘classic’ Napalm Death tracks that give you everything you could want or expect from them in a somewhat more traditional way, like the title track and also “Contagion”, a contender for one of my favourite ever ND tracks. If you imagine ND playing Leviathan-era Mastodon but even faster, then you’re not far away from it. Just glorious.

Seems mad to say, but this is may be one of the most diverse and yet accessible ND records I’ve ever heard. In fact, it could possibly even be a good place for new fans to start if they’ve not listened to ND before. The record has character, an intelligent and insightful message, stylistic range and ND’s signature visceral savagery. Yet consuming all of this feels easy. More than easy, it feels energising, exhilarating and a whole shitload of fun. If the name of the album had drifted from your mind, now is probably a good time to revisit it. Because it’s perfect. The record itself is not far off, either. Thank you, Napalm Death. Thank you.

Into It. Over It.: Figure