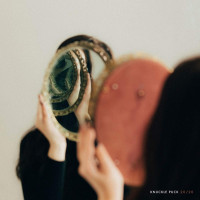 It’s evident from the get-go that Knuckle Puck went into writing their third full-length album without feeling pressured, or something to prove. 20/20 bursts out loose and upbeat, like a weight was lifted off their shoulders, and cruises ahead with an instant catchiness in its bouncy title track that almost seems effortless. The opener is simple and as cookie-cutter as you can get, yet manages to be one of their most consumable and everlasting songs to date.

The new LP from the Chicago pop-punkers comes three years after Shapeshifter, a record that had a tone to it that just felt fabricated, like the band was being forced to break free from a certain stigma. 20/20 sounds like a directional response in looking back on that experience, with a back-to-basics approach pumping out pop-punk jams that look back on relationship woes.

Lead single and surefire set mainstay, “Tune You Out,” was released pre-pandemic, with four additional singles shared over the course of the year. Each had a bit of a different flavoring to them, like “What Took You So Long?” with riffs and a vibrance that come straight from their launch-pad EP, The Weight That You Buried, or “Earthquake” a blander, mall-punky track that could’ve hit the radio waves and reached wider audiences any other year. It was going to be interesting to see how these songs settled within the record, and to hear if any sequencing of the tracklist impacted the original perception of each. Unfortunately, this batch of tracks sits like a block in the middle of the record, packed in together back-to-back-to-back-to-back with no lift or fresh perspective after weeks of listening.

The tail-end of 20/20 finds Knuckle Puck stuck in the mid-2000s with another album highlight in “True North.” The skip-along tempo and vocal deliveries are pulled right from The Starting Line, and can fit right into 2005’s Based on a True Story. Even “Miles Away,” the embracive and heavy-hitting album closer, channels the likes of Yellowcard and The Ataris.

There’s something about 20/20 that feels natural and oddly pure, like Knuckle Puck returned to a songwriting headspace that’s laid back and free. It packs in summer vibes with a straightforward charge that comes out clean and absorbing, proving you don’t need to evolve or pivot sonically to grow in this genre.

Eviction: The World Is Hours Away [reissue]