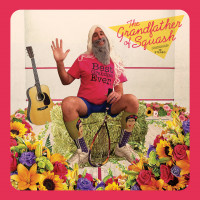 The Grandfather of Squash

I came across The Eradicator quite a while back through mutual friends. I remember thinking - this is fun, but gimmicky bands never last. Well, sometimes you just have to admit you’re wrong. Several years, two LPs, two EPs and a double live album later, The Eradicator is still going strong. And now - a spinoff!

The eponymous “The Grandfather of Squash” explains the origins of the great game of squash over acoustic guitar and snare drum. The Eradicator clearly inherited his raspy howl from his old grandad. “He’s a Good Boy” expresses GFoS’s pride in his grandson. “A Cold Hard Breakfast” has a bluesy riff that sits somewhere between Johnny Cash and Lucifuge era Danzig. “So So Proud” revisits the pride in the grandson theme. Sadly, “Caught in a Mosh” is not an Anthrax cover. It’s actually more like another one of Slania’s projects, Bad Mechanics. (I guess it’s not actually sad, Bad Mechanics are really cool!)

Next up is “Don’t Forget About Us”, followed by the double entendre storytelling of “Don’t Touch Balls”. The songs are mostly around the two minute mark, so the jokes don’t wear themselves out too quickly. You can probably imagine what “Raised Him Right” is about. “I Am Not The Eradicator” and “Grandfather Out” are plays on songs by The Eradicator. Overall, this is a fun collection of songs, at least if you’re in on the joke. The uninitiated should probably check out The Eradicator before they move on to more advanced concepts.

If you are an Eradicator vinyl completist, you’d better not sleep on this. Only one hundred copies will be pressed on a single sided 12 inch. A portion of the proceeds will go to MetroSquash, a non-profit that incorporates squash into helping kids succeed.