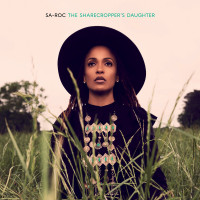 Sa-Rock has been toiling in the hip-hop underground for a while now, releasing nine albums over the course of a decade. The Sharecropper’s Daughter may not be a major label debut, but it is her first album on Rhymesayers, which is one of the biggest labels in the hip-hop underground. The album becomes the culmination of all of her hard work over the years as well as her innate talent. In a genre that’s so male dominated, The Sharecropper’s Daughter proves that it never has to be. Sa-Roc delivers her rhymes with a powerful authority and skill that reminds us why she should have gotten this recognition she deserves a lont time ago.

The album kicks off with a short track called “EmergencE” with a rather unnecessary introduction by the ever overrated underground rapper and former slam poet, Saul Williams. Thankfully Williams’s introduction is very brief before Sa-Roc comes in with a manic delivery to start the album off properly. On the second track, “Gold Leaf,” as on several other tracks, Sa-Roc's delivery sounds more like dancehall reggae vocals than hip-hop, making for an energetic and joyfully danceable track. “Rockwell’s America” with guest star Styles P has a bit of that reggae delivery as Sa-Roc ridicules the idyllic Norman Rockwell vision of American culture. The title track has R&B singer Ledisi returning the favor from Sa-Roc appearing on her album. While it’s a good commentary on racial politics, it revolves around a phrase that’s far from original and has become a bit of a cliché at this point: “They tried to bury us, but they forgot that we were seeds.” But the song almost makes up for it with the repeated line that ends the song “I’m just hoping the rest of you see the connection between truthful and healing.” While many of the songs talk about race, “r(E)volution” is the song most directly addressing the Black Lives Matter movement, and it does it with both anger and vulnerability in the same song. My favorite track is “Goddess Gang,” which, in traditional hip-hop style, is bragging about expensive tastes and personal skills. But the fact that it’s so female centric makes it somehow less hedonistic and more empowering. “Forever” is the emotional core of the album, dealing with Sa-Roc's history of depression and self-harm but finding a way to move past them to find some sort of catharsis and movement towards optimism.

The Sharecropper’s Daughter is an album that unapologetically celebrates blackness and womanhood. Disproving the idea that rap is a man’s game, Sa-Roc demonstrates her ability to rap circles around most male rappers who think misogyny and bragging can stand in for actual talent. The Sharecropper’s Daughter is a semi-major label debut that establishes without a shadow of a doubt that Sa-Roc is here to stay. And, as she says on the song “Deliverance”: “If my black fist and my womb irks you here’s the world’s smallest violin.”

Public Enemy: What You Gonna Do When the Grid Goes Down?