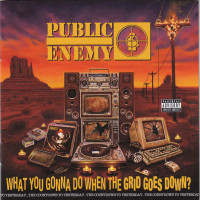 Over the past few years, Public Enemy frontman Chuck D has made it a point to pontificate on the virtues of a group as opposed to a solo emcee. Roughly speaking, Chuck has made the argument that while groups aren’t necessarily “better” than solo emcees, there are things that groups can do that a solo emcee simply can’t- such as bringing down a gatling gun barrage of noise. What You Gonna Do When the Grid Goes Down? proves this argument.

Much to the releases’ credit, it plays like a mixtape. It’s a non-stop jam record that snaps from track to the next without a single break and often one track flows into the next. And really, it almost is a mixtape- six of the tracks here are slightly reworked versions of songs previously released on the digital-only, now deleted, Nothing Is Quick in the Desert from three years ago and two of the tracks are re-cuts of classic PE tracks. But, the thing is, that’s not a deficit- it’s a strength. With over twenty guests, some being PE’s influences, some being PE’s contemporaries, and some being the next generation, the album seems to PE swinging for the fences for a newly definitive release. They nail the pitch.

It’s foretelling that the Uncle Jam himself, George Clinton, opens the release with one of his wonderfully Funkadelic acid-space orations. Just as he finishes his cosmic musings (which are really directed at world economy collapse) PE proper kicks in with “Grid” and the hard beats propel the duration of the release. Chuck D is in top form here- at times, you could accuse Chuck D of being somewhat of Johnny Ramone- yes, he’s ALWAYS working, always touring, always recording, but is it for the joy of the art or just to do more work?- on this release, it’s definitely for the joy of the art and that pays off dividends. “Toxic” is a hard-as-hell slow motion crusher with Chuck D breaking down the commoditization of Hip Hop while also taking swings at “45”. For the most part, Chuck D stays on his usual topics, which is just fine, here. Now is an ideal time for Chuck to raise the issues that form the core identity of the group. Chuck has always “fought the power” as it were, and quite suitably 45 is under constant fire. That is as it should be. “Rest in beats” finds Chuck in a reflective mood, showing that he’s not all aggression (or defensive aggression as it were). And it’s good that while he is a resolute defender and promoter of Hip Hop, he makes it a point to attack industry and even cultural claws which have ensnared the genre to a degree.

“State of the Union”, which is produced by DJ Premiere, finds the group ramping up the speed and Chuck D being targeted and blunt in alternating attacks. The man knows what’s at stake with the upcoming election and instead of bleaching out the threat with overly-flowerly worldplay, he puts the issue up front and center. This is what Chuck D does better than almost anyone.

Yet, one of the reasons that Chuck D is in such fine form here is that his foil, both sonically and sometimes personally, Flavor Flav is thankfully back in the group. Flav and Chuck D were boxing last year with the battle "culminating" in Flav getting fired from the group (maybe?) and then the group claiming it was all a hoax designed to prove that the media is not reliable (really?) But, with Flav back in the band doing his thing, that scuffle is yesterdays news. Flav and the Chuck may or may not be getting along personally these days (the credits suggest that Chuck and Flav were rarely in the same studio for the recording of this LP), they are gelling 100% artistically and that's what counts. Big time. And moreover, Flav, also underscores his importance to the group in not one, but two ways. First of all, Flav remains, and has always been, the fun aspect of PE, which is essential. Chuck D might give you the hard truth, but it’s a lot to take in at once and Flav’s playful, yet perfectly timed interjections let you know that this msic is important, but it can also be a party. And yet, the few times Flav breaks away from his court jester personae are some of the album’s most poignant. In an interview from years ago, Shock G stated that Flav is the Yoda of Hip Hop, in that there is much more to him than meets the eye. Here, Check out “R.I.P. Blackat” where Flav is not only truly earnest, he’s quite moving as his voice drops to a certain tenderness. Don’t underestimate the Flav.

And sure enough, the nearly two dozen guests here add both a gravitas and liveliness to the LP. It’s exciting to hear PE, Run-DMC, Ad Rock, and Mike D team up for a thrilling e-work of “Public Enemy Number One,” with mostly new lyrics. (Ad Rock and Mike D take a low key approach here, but it’s something that this is the first time their vocals are both on the same track since the tragic passing of MCA). Likewise, the guest packed re-cut of “Fight the Power” is thrilling- Nas takes time to salute Chuck and Flav and it appears no one wants to let the legends down, so everyone pretty much brings his or her A-Game. (Hell, even the group's old Label, Def Jam, wanted to reconnect here! Those that really pay attention will notice that even Terminator X shows up briefly and cuts it up on the same track as PE’s current deckmaster DJ Lord! Though, Professor Griff is nowhere to be seen…) Likewise, Ice-T’s guest spot is only a few seconds, but that’s all the Ice needs to deliver his unique political rapper-as-street hustler wisdom.

The album was mixed and sequenced by C-Doc, so that’s probably where the mix tape feel comes from and also some of the magic. Even though Chuck has always been the mastermind behind PE, he usually isn’t shy in handing the reins to other people here or there. He does that here with C-Doc and in doing so, proves his thesis- nothing hits like a Hip Hop group, and few, if any Hip Hop groups, hit like PE at their full power. It’s certainly not a coincidence that at the same time Chuck D fears the grid may cut out due to failed governmental systems, he has powered up his group to full charge.