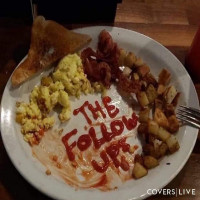 The Follow Ups put out an excellent debut album last year called …Don’t Like You Either, although with 10 tracks and only a total runtime of 20 minutes, it’s definitely the shortest album I’ve ever heard that qualifies technically as an LP. It was a really fun little Ramones-core album with some delicious horror movie references and a hilariously random love song about Nancy Pelosi. Now they’re back with a live covers EP…sorta.

The title might mislead you into believing that this is an album of live covers, but actually it’s three covers followed by five live tracks. And the three covers they did choose are mostly pretty obscure: “B Flat” by Gob, “Missiles” by Latte , and the most famous song on the whole album, “Sunglasses at Night” by Corey Hart. The first two covers are competent but pretty unremarkable, and with as obscure song choices as they are, an uninitiated listener could very easily mistake them for originals. “Sunglasses at Night” is the only cover on this album that has a little fun injected into it, with the original being such a joke 36 years later.

The five live tracks have no audience sound on them, and their Bandcamp page says the album was recorded “during the end of the world 2020” at someplace called BadWater studio, which leads me to believe that these were recorded during the pandemic on a live-streamed show. With no interaction with the audience, other than a brief moment to acknowledge who the band is, the tracks just sound like rerecordings of tracks from the album.

I guess there’s nothing really wrong with this record, other than there’s nothing really great about it either. It feels like its purpose is more to alleviate the band’s own quarantine boredom than to make a truly worthwhile release. In that sense, it’s kind of a throw away record that you might listen to a few times and then discard. Personally, I’d rather just listen to their studio album again.