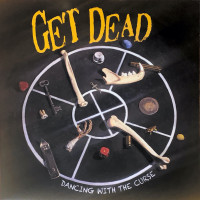 I’ve been a fan of Get Dead for a while now, and what I originally became a fan of, their use of acoustic guitars and heavy lyrics, has definitely morphed into other things as the years went on. Their last album, in fact, had no acoustic songs at all, but the lyrics kept bringing me back. Sam King has this intense way of taking ordinary, every day experiences, like ordering a drink from a bar, and steals the soul of the listener to imbed it into the song, making the average fan a part of the music itself.Dancing with the Curse does just that, and so much more, as it imbeds our struggle, during these trying times, into the soul of the music, making its listeners meld into the song itself.

From the opening track, “Disruption”, the listener knows this record is somehow different than anything they’ve done before. Sam uses his experience from hip hop to deliver a half-spoken word intro, into a warning of sorts: don’t listen if you aren’t ready for some heavy shit. Well, I was ready, and just as the second track started playing, I realized that nothing could have prepared me for the genuine growth this band had made, and somehow captured in the form of a collection of 12 songs in 31 minutes. Track 2 explodes with a guitar sound that is extremely reminiscent of Op Ivy, which sure, plenty of bands do, and do well, but somehow its use here, after the dim outlook left by the first track, hooked me in ways I can’t explain.

Despite each song, sonically, being very different, they are strung together perfectly, so that the listener feels like they are listening to one piece of art, not a mere collection of tunes, something I believe most bands are guilty of in this age of constant content. By the time you get to track 4, “Stick Up”, you’re already singing along like these songs have been with you forever. A simple chorus of “What the fuck did you think was going to happen?” perfectly summarizes the theme being presented. We did this shit to ourselves, and now we have to do something about it. “It feels like this place is cursed / so do your worst / we’re all going down” rings through you, as they slow it down for track 5. The move is subtle, but perfect. Going from an anthemic song, getting your blood boiling, you move to a punk ballad that brings tears to the corner of your eyes, as you hear this story that feels like the end. The end of time. The end of an era. The end.

Once digesting the heavy lyrics is done, you’re eased into some more fun. “Fuck the Left / Fuck the Right / Fuck the Conservatives controlling the kids / Fuck the liberals who take it all so literal” follows the intro guitar riff, and everything after gets you right into the fray once again. A true statement on the state of our government, and everything wrong with our world, blasts out. The lyrics have always been beautifully written for Get Dead, but something about this record pulled me in even further, and I truly think its got nothing to do with the lyrics. You’ve got songs that sound a bit ska influenced, to songs that are straight out of the hardcore playbook, to songs that could have been a radio hit (minus some of the language), and they all play in perfect sequence creating a harmony I haven’t heard in years.

The tracks “Hard Times” and “8 Track” are definitely the most “fun”, with “8 track” being a very familiar Get Dead sound, with a bit more of the upstroke guitar playing that is found on this record. Honestly, the lyrics are probably great on both of the songs, but it was the music that excelled on these two, to the point where I found myself near dancing in my car as it was playing. And despite my lack of attention to the lyrics, Sam’s voice becomes an instrument on its own, providing a soundscape that defies the standards set by your average “Fat Wreck” band.

From start to finish, this record is unbelievable. There is not a bad track on the entire thing. The lyrics, the music, the feel, the anger, the grit, the pain… they all invigorate you with every note, and prepare you for the upcoming fight that the record seems to predict. I truly believe that this is the record that puts Get Dead in the punk rock history books. It should be the standard by which all other modern punk albums are compared, because they could not have done a more perfect job.