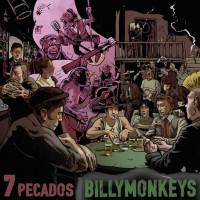 Spain's Billymonkeys have decided to immerse us all into the influences of their sinful world with a reconstructed version of the seven deadly sins. Their psychobilly style has gained steam. In order to maintain that momentum, they have recently launched their third album ‘7 Sins’.

With eight songs to air their aggression, this album throws back to the band's earliest songs and their earliest musical influences. There are nods to bands like The Saicos, Meteors or Sir Psyko and his Monsters- but the nods are more stylistics than covers or lyrics theft and nothing is concrete enough to be recognizable to any specific songs by those bands. While the music is diverse, switching between psychobilly and garage rock, the vocals stick to a style that unites the tracks.

The more danceable song might be "Lujuria". While the track itself might be explicit and surprisingly lurid, the rhythm is quite catchy and gets your feet moving. "Soberbia" is the song that deals with self-loathing, and you can even see yourself in the lyrics if you look hard enough, especially at the ending chorus. Then again, the whole album provides material in this respect.

While the band doesn't touch on all corners of psychobilly, it is a great album. It was also released on vinyl, which sensee for the old psychobilly nostalgics.

Get Dead: Dancing with the Curse