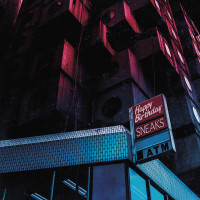 Sneaks is back in just over a year and a half with her new album Happy Birthday and latest release for Merge Records. Having made her mark playing minimalist post-punk on last year’s well received Highway Hypnosis, Sneaks whose real name is Eva Moolchan, expands on those sounds once again enlisting mixing and production from Carlos Hernandez and Jacknife Lee whose combined credits include aiding in the creation of works ranging from Robbie Williams and U2 to The Sidekicks and AFI.

On Happy Birthday, Sneaks finds herself leaning more heavily on elements of trance and hip-hop than her previous minimalist post-punk. The continuity in scope of sound and growth in ambition with these additional layers add a glitzy and nervous electronic energy to the thoughtful production found on the skeleton of the songs. This is given emphasis through repeated lyrics delivered in hip-hop cadences. Sneaks moves back and forth from flowy singing vocals to rhymed words and couplets that function as sounds of pattern into the mix of beats.

On second track “Faith,” previous listeners will see the foundational bass and drums given synth runs and a propulsive dance beat led by hi-hat splashes. The song ends with manipulated sound waves over Sneaks singing, “Faith and love my friend / Is the only thing we’ve got.” References to astrology are glittered throughout the record most notably on “Mars In Virgo” and “Scorpio on Your Side” which also serve as lyrical hooks utilizing the two vocal styles mentioned above.

Happy Birthday succeeds when Sneaks post-punk, goth, and hip-hop influences co-exist with each other. “Sanity” is a clear example of this with rhymes over dark, goth vibes that sound like Depeche Mode with more complimentary hi-hat work to go with it. “Winter Weather” laments the banal turn to colder weather over trap beats played in post-punk fashion. It’s easy to get lost in this record only to be brought back from its trance with a pop out vocal.

Happy Birthday listens like a transitional record. It still has all of the elements that brought attention to Sneaks previously but also incorporates more maximalist elements fit into its minimalist production. At times, it can feel stuck in that tension, but never takes away from the vibe this album puts you in.