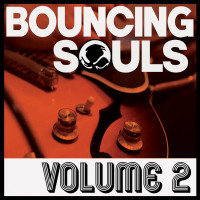 There isn’t much that can be said about The Bouncing Souls that hasn’t been already. After 30 years together, the band remains almost universally praised among punk, indie, emo, and hardcore circles. Or if not praised, at the very least given a pass. It’s a wonder, too, that the praise hasn’t gotten much beyond what’s still considered the undergrounds of music. They very well could have, too. In 1994 they appeared to be this close to riding the same wave to the mainstream as The Offspring, Green Day, and Rancid did. But they stayed behind, and instead they remain punk’s best kept secret to the outside world.

As a culmination of their celebration of 30 years as a band, Volume 2 provides a different look at a selection of songs spanning the band’s entire career. Well, mostly.

The Souls didn’t set out to make a new impression on Volume 2. This was a chance to take the best elements of old classics and package them in a way that shows what their fans have known all along: That The Souls were never one-trick ponies, that their songs could at any time have been presented in any number of different ways and worked just as well.

That’s not to say that Volume 2 should be construed as a vanity project. This is a matter of perspective. We have here a group of guys who are looking at middle age in the rearview, who took the old adage of wishing you could go back and change it all and decided instead that the groundwork they’d laid had proven to be time well spent. Instead they took all those years of hard earned wisdom, experience, and bigger hearts than most, and simply looked at it all with new eyes.

It worked almost perfectly, too. A few of the tracks here, like “Argyle” and “Say Anything”, will remind you of the common part of a live Bouncing Souls show of recent times, when they calm things down to do a couple acoustic numbers. They’re virtually unchanged except for some differences in instrumentation that lighten the songs. It’s not really a bad thing; again, the main idea is to hear old songs differently. The trouble, however, is that they’re completely without nuance. Sure, we can hear the words a little better, but the songs are flat. And, especially on “Argyle”, the vocals have a bad tube echo that makes them sound like they were recorded in a bathroom.

The exception, as for the songs that remain mostly un-messed with, is “Kids and Heroes”. It was never their strongest song lyrically, but you wouldn’t know it given how great it sounds here. The harmonized gang vocals work perfectly over the strumming acoustic and stomping drums, presenting a laid back aura of a roots-rock anthem.

“Gone”, consistently the basis of epic crowd shout-alongs, gets an entirely different twist here. The drums are muted down to being nearly taps, there’s a good bit of flange on the guitar, and the chorus has a swoon-inducing medley of synth strings. That’s right, folks: “Gone” is now a Cure song. And it’s amazing. But they don’t stop there. “Hopeless Romantic” takes it even further. It uses a drum machine and keyboards, both evidently on the “1984” setting. Mix that with the scarred love lyrics, and the goth kids haven’t danced this hard since “Black Celebration”.

The most recent track to get reworked is 2019’s “Favorite Everything”. Rather than a jumpy skate punk bouncer, it’s mellow and bass driven, with a tender horn featured on the solo. It’s reminiscent of the work of quirky indie songwriters like Marshall Crenshaw or Matthew Sweet. The original “Highway Kings” sounded fine, if a little choppy. But the song all about taking chances and hitting the open road here is a stomping roadhouse blues-rock hymn, straight out of Bakersfield. It’s a reimagining that’s so fitting, you almost anticipate it before even hearing it for the first time.

But the prize for outdoing itself the best goes to “Ghosts On the Boardwalk”. I loved the original version too, as did the government of Asbury Park, NJ; enough to use the lyrics in a tourism campaign. But the softness of this reboot suits the source material exceptionally. The added depth- subtle, peaceful, and fresh- brings out the nostalgia and scenery that this tribute to the bands hometown has always deserved to convey. I’ll just come out and say it- This is what “Ghosts On the Boardwalk” was supposed to be.

While I suppose the band didn’t want to overstay their welcome, there are some notable omissions on Volume 2. “The Good, the Bad, and the Argyle”, “The Gold Record”, and “Simplicity” are not represented. Time and expense are things, I know. But one can’t help wonder if the results of the new “Highway Kings” would have rubbed off just as well on “Midnight Mile”, or if “Hero Zero” could have also joined the dark wave dance party. And let’s be serious, we as a nation should be able to hear a moving, emotional ballad take on “I Like Your Mom.”

Volume 2 isn’t here to win you over; you know these songs by heart. It’s not here to slam to; this is a different kind of energy. Veteran bands have revisited their catalogues before, for an array of reasons. But almost none have been able to pull it off with the dignity and heart of Volume 2. The next time you run into an old friend and you’re recalling all of those crazy adventures you had 20 years ago, don’t be so quick to dismiss them as juvenile antics. Those things mattered, and they can take on wonderful new meanings when you look at them as the person you are today. That’s this record.

The Mountain Goats: Getting Into Knives