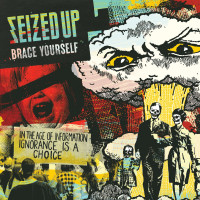 Today’s old-hardcore-guys-yelling-at-you review comes courtesy of Seized Up. The supergroup of sorts is made up of punk and hardcore veterans from Santa Cruz bands like Bl’ast!, Good Riddance, The Distillers, The Nerve Agents and Fast Asleep. It’s obvious within the first five seconds of the opening track, “Manic Decompression”, that Seized Up are still pissed.

If 2020 is a powder keg waiting to explode, then Brace Yourself is the perfect soundtrack. It’s as tense as it is intense, and takes an unflinching look at many of the problems we face as a nation. Metal guitars, pummeling drums and shouted punk vocals are the right vehicle to deliver the confrontational lyrics, and Seized Up/Bl’ast! frontman Clifford Dinsmore is the right raspy voice. There’s not much melody here, just good, old fashioned hardcore and lots of righteous rage.

Seizing up is what happens to a piece of equipment when it gets too old. Luckily, these older guys still seem to have a lot of life left in them. It’s strange that in this age of political chaos, holdovers from the Reagan era seem to have the most potent voices. Brace Yourself is a powerful album that asks big, important questions. Having some old-hardcore-guys-yelling-at-you would probably do you some good. Seized Up are just the guys.

The Vandals: Curse of the Unripe Pumpkin