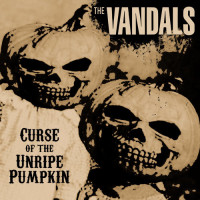 16 years after the release of Hollywood Potato Chip, The Vandals finally give us new music. Sort of. Okay, not really. The title track of Curse of the Unripe Pumpkin was originally recorded for a compilation last year called Punk Rock Halloween II on Cleopatra records. According to the band’s Facebook page, the song was originally written by bassist Joe Escalante’s father in the 1920’s-1930’s and the Vandals dug it out and covered it. Apparently, a year after releasing the track on the Punk Rock Halloween II compilation, the band decided that “Curse of the Unripe Pumpkin” deserved its own release, and they used it as an excuse to put out a collection of rarities. Most of the rest of the songs on this collection come from the soundtrack to the 1996 film Glory Daze, a pretty terrible movie starring a then-unknown Ben Affleck alongside Alyssa Milano and French Stewart (but which does have an excellent punk rock soundtrack) and the soundtrack to the 2002 film That Darn Punk, which starred Joe Escalante and had appearances by all of the rest of the Vandals.

The title track is a fun and goofy Halloween song and, if you hadn’t told me that it was a cover, I would easily mistake it for a Vandals’ original. Each of the soundtracks these songs are pulled from had an instrumental “theme” track, “Theme from Glory Daze” and “Theme from That Darn Punk” which go a long way to demonstrate that the Vandals are actually talented musicians can do more than just tell jokes about mullets and statutory rape. “I Don’t Think You’re a Slut” comes so close to being a progressive and open-minded song about promiscuity but doesn’t quite get there. Their cover of “My Heart Will Go On,” featuring someone named Katalina, is my favorite kind of punk cover because they refuse to play it for laughs and let the irony of a punk band covering this song speak for itself, playing the song as seriously as if they wrote it and wanted it to be taken seriously. The final track on the album is called “Mambo (Japanese Remix)” but for the life of me I can’t find anything online telling me where the original, unremixed version of this song was released. But the Japanese remix is a lot of fun with its horn section and disjointed rhythms.

While it’s nice to hear these obscure Vandals tracks, I would really prefer to have a new studio album from them. When it comes to mildly offensive, jokey-but-not-always punk bands, the rest of you can have NOFX, I’ll take the Vandals any day. They did, after all, give us the greatest punk rock Christmas song of all time, “Oi to the World.” But The Vandals are one of those bands that have slipped into semi-retirement, playing the occasional festival and putting out compilations like this one. Someday we’ll get ourselves a bright and shiny new studio album from The Vandals, but, until then, it’s nice that they’re putting out some new-ish content for us.

Seized Up: Brace Yourself