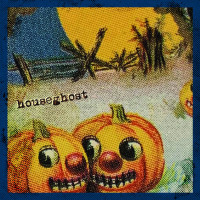 Here lately, a lot of pop-punk has been a rough go for me. The good records are good, but the not so good ones leave me wishing I was listening to a Ramones album or one of the bands you would have found on the Punk-O-Rama compilations back in the day. That isn’t to say there aren’t bands out there who still do it right, but there a lot of bands out there still trying to find their voice or simply recreating what came before them with no attempt to even have a voice of their own. Thankfully, there are still bright spots. Among them is Houseghost, whose debut album hits all the notes I look for in a great pop-punk album. One of which, is nostalgia, which they accomplish by paying tribute to their influences without ever recycling them.

One of the recurring elements of this album, which starts with the cover art, references to horror, the supernatural and general spookiness. Thankfully, the band never falls completely into the horror punk genre. Rather they use the lyrical references to deal with topics like mortality, loss, isolation, and depression. While songs that are actually about zombies, werewolves, and what have you are fun. They are really only fun for about one month out the year, and then on certain occasions afterwards. By tying these topics back to real life situations and emotions, it opens the song up by making rough topics more approachable.

While dealing with creepier elements lyrically plays a large role in this album, there are moments when the band steps away from it. A great example of this, is “No Fun Summer” which went on my “Summer 2020” playlist as soon as I heard it. I’m not sure when this song was written, and wanting to get someone outside so they can enjoy the sunshine and life in general again can be applied to anyone who has dealt with depression, or loved someone who has. But, it also serves as a perfect song for a largely imperfect year. If only for the closing refrain, which repeats the songs title, having been stuck in my head for the past several weeks.

“Turn to Dust” is nestled towards the end of the album, and is likely my favorite track off of it. Aside from having a great opening guitar hook, the song deals with mortality. Not so much the concept that we’re all going to die. But, rather the burden we may place upon people while waiting to do so. It’s a not so much a fear of death song, as it is a fear of dying song and what that will do to those around us song. Full disclosure, it is also possible that I am reading into the lyrics, on this album way more than the band intended, or at least more than any healthy thirty-five year old should be.

Great songwriting and lyrics can make an album good; it takes good vocal performances to push that album into the great territory though. This is where Nick and Kayla, who play guitar and bass respectively, succeed the most. While they both sing full songs on the album, on the occasions they trade vocal lines it builds the song even more. Part of this, is likely due to the differences in their voices. Nick sounds like a younger Ben Weasel with just a touch of Nick 13, from Tiger Army, thrown in. That is to say he can sing, but his voice isn’t free from sand paper grittiness either. Kayla, on the other hand, has a voice that brings to mind Alison Mosshart back when she was in Discount and didn’t have the husk of a seemingly endless pack of cigarettes burnt into her vocal cords. The real treat though, is the vocal harmonies. This isn’t to say they’re Simon and Garfunkel. They are, however, brother and sister and when they harmonize they do so with the comfort gained by singing on road trips or just sharing space growing up. They know one another’s voice and they know how to blend them together. They do so in a manner that is, frequently, only found in siblings or people who grew up together.

This album has the early to mid-nineties running through its veins. The simple thing to would be to call it pop-punk, that isn’t what this though. It reminds of when bands like Superchunk were just breaking on the national scene and Discount would release their debut a few years later in 1996. That is to say, back when alternative meant you had a lot of influences from various genres. And maybe nobody could decide what to call your music that mixed punk, girl groups, and guitar noise … but the songs were there. With Houseghost, their influences are broad, and the songs are there. I can’t wait to hear the next ones they write.