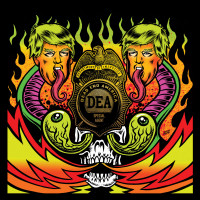 Steve “Thee Slayer Hippy” Hanford is best known for being the former drummer for Poison Idea. Sadly, Hanford died of a heart attack in May of this year. The good news is, before he died, he managed to finish recording an EP with his new “anti-Trump” project, Dead End America. Hanford put DEA together, and they were an impressive collective of punk and metal musicians. Crush the Machine is four tracks of relentless, hateful, old fashioned hardcore.

Legendary, early Cleveland punk band The Pagans had a great song called “Dead End America”. Is that where they got the band’s name? Or is the DEA acronym just a not so subtle nod to the Drug Enforcement Agency and various members' love of illicit narcotics? Also, is the cover art cool or tacky? These are the questions that keep me awake at night.

The songs are fairly self explanatory. The thrashy, technical “Dead White Hands” is a showcase for Hanford’s excellent (and possibly underrated) drumming. You can definitely hear the Poison Idea influence on “Twitter Troll”. “Bullet for 45 (Straight from a .45)” almost reaches the two minute mark. It’s also the best song on the EP, and its lyrics provide the title. “Burn down the Whitehouse and take out the trash/...Crush the machine”. “Searching for a Reason” wraps things up on a Cro-Mags like heavy note.

While the modern “political” punk and hardcore bands continue their weak ass response to Trump, these holdovers from the Reagan era deliver a much more powerful manifesto. Dead End America will likely serve as Thee Slayer Hippy’s epitaph. As far as eulogies go, you could do a hell of a lot worse than Crush the Machine.