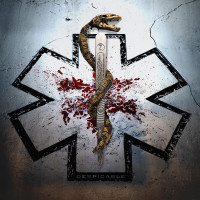 It’s been seven years since Surgical Steel was released. Man, that’s a long time. But when you consider that it was seventeen years between Swansong and Surgical Steel, then maybe I should stop my whining. Admittedly Despicable is only a 4-track EP, but with a full-length (Torn Arteries) waiting in the wings ready for release in 2021, it seems that Carcass are back in full effect. Well. Assuming the world is still standing for them to be able to tour this new suite of songs at some time next year…

And it would be a real shame if they can’t, based on what’s on offer here. Given their scant output over the last 20 years, it may well be that for some people, Carcass are still characterised by their 80’s work; in the same way some people still think of Scum (that Bill Steer also played on and Jeff Walker provided the artwork for, of course) when they think of Napalm Death despite them not sounding like that for literally decades. But without digging too much into the history of Carcass’ sound, let’s cut to the chase. The 4 songs that make up Despicable paint maybe a surprisingly broad picture of modern metal. Yeah, that’s right, modern. It may be the case that Bill and Jeff (remaining founder members) are in their early 50’s, but there is no way you would know that if you listened to this EP with no prior knowledge of them or their work. These songs feel fresh and absolutely brimming with energy.

Lead single “The Living Dead At The Manchester Morgue” opens with a triumphant dual lead riff and goes through myriad different sections in its 6-minute runtime. After the intro (that is punctuated by some extraordinary drum work from Daniel Wilding) it seems the track settles into a mid-paced chug, over which variations of a couple of riffs are played, but then around the 1:50 mark, the band ramp up the tempo and shake off any suggestion of rust as the song gallops, weaves and slashes its way through the next minute or so before a riff is introduced that I’ve hardly been able to get out of my head since I first heard it. From there, the tempo is pared back and a positively serpentine solo slithers around over the top of the riff. The lead work from here on is nothing short of superb. Dextrous, technical, but always serving the song. The flourishes, super-speed fretwork and Walker’s almost blackened vocal should leave you in no question as to how Carcass are maturing: Despicably.

For a brief look at the other three tracks, “The Long And Winding Bier Road” has a litany of riffs that could have been penned from guitarists as diverse as Mark Morton from Lamb of God, to Anders Bjorler of At The Gates or even Adam Dutkiewicz of Killswitch Engage. I suppose the unifying factor here is managing to pair real metallic crunch (and extremity) with an unconventional but irresistible sense of melody. And actually there’s a real strut to the opening riff that is not synonymous with Carcass, but it sure fits them. “Under The Scalpel Blade” again has moments that could be described as ominously lurching or lumbering, but when the classic metal influences kick in (the lead line and subsequent solo that starts around the 2:30 mark is a great example) then the song gets this huge lift and I find it near-impossible not to smile. And then that smile turns to a huge, shit-eating grin when the tremolo picking and a fully blackened scream kick in immediately after. “Slaughtered in Soho” begins with a descending dual riff that is oddly welcoming. The riff is used throughout and there’s also an incredible solo that punctuates the song in the second half. It is still the weakest song of the four tracks for my money, but then the other 3 are of extreme quality.

Arguably the most exciting thing about this collection of four songs is that they show the potency and creativity of Carcass in 2020, whilst also being essentially off-cuts from the record that’s been pushed back to 2021. If Jeff, Bill and the guys are in a position where these songs could at one point have been deemed not good enough to release, then the mind boggles as to what is on the album itself, because the quality here is superb. You can still experience the thrill of their grind roots through the ADHD song structures, the mid-pace sections twinned with the guitar tone and vocal approach ticks the death metal box, I’ve mentioned the blackened influences already, but the whole EP is elevated beyond genre boundaries by the proficiency in which all of these styles are melded. The fact that classic metal, melodeath and even Southern metal sensibilities bleed into the songs also make the whole thing spectacularly easy to consume. It’s a fun place to spend 18 minutes or so and that’s maybe not what you might expect from a band with the history and aesthetic of Carcass, but I would recommend this as an ideal window into their world if you’ve not checked them out before. And if you like what you see, then get hyped for the album. But I doubt I have to tell you that if you’ve listened to Despicable, because it’s objectively fantastic.