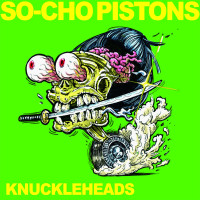 The global impact the Ramones have placed on punk rock is second to none. This has been proven by the countless bands from all over the world who have paid homage to the NYC legends through their song writing. The So Cho Pistons from Hiroshima, Japan are no exception. For 25 years, the band has been churning out countless albums and singles of their own brand of Ramonescore. On Knucleheads, the So Cho Pistons branch out from traditional four-on-the-floor pop punk and take on street and horror punk sounds as well. Traditionally, one would know what to expect from this band, but this release will appeal to a wider audience.

“No Way” kicks things off in true Pistons style. The track boasts many quick chord changes the band has been notorious for over all these years. Infectious backing vocals are present in the chorus. The band quickly shifts to a more street punk approach on “Don’t Be a Liar (Let It)” which follows. This song has Rancid vibes and extreme catchiness. The traditional 90s pop punk sound comes quickly back on “I Love FiFi” which is genuine Ramonescore. This track is complete with catchy choruses and palm muted guitars in the verses. “Rise Up” is the first track on the album that showcases a horror punk feel. This fist pumping track will appeal to fans of later era Misfits or even fellow countrymen Balzac. This tempo is heard again on “One Rocket” which is another heavy rocker. This track is repetitive both vocally and musically which adds to its catchiness. “No” is a standout track for me on this album. Solid moving basslines are present all over the track. This mid-paced rocker has many “whoas” present to please fans of Teenage Bottlerocket. This is the most modern pop punk sounding track on the album. The happy and upbeat “To Dancing” follows to keep spirits high. The So Cho Pistons go back to more aggressive Dee Dee Ramone style songs on both “Tou Senbo” and “Face of Fake.” Both tracks feature quick chord changes and heavy down stroking of the guitars. Mid-era Screeching Weasel is present on “Ame No Naka (In the Rain)” which follows. This darker track has solid backing vocals which are reminiscent of earlier Lillingtons. The street punk sounds come back around on “All Right” to change things up a bit. The track features a distorted bassline in the intro that properly sets the tone. “One Nite” is another classic 90s style pop punk tune with great harmonies and a bouncing bassline. “Piston The Bop” is a tried and true Ramonescore number that helps the tail end of the album end strong. The use of repetitive vocal lines help add to the catchiness and melody. Quick chord changes and strong backing vocals make this a total ripper of a track.

If you like your pop punk with a bit of variety, then Knuckleheads is the album for you. It should be noted that this album features 18 tracks which clock in at the 30 minute mark in total. Unlike other pop punk bands, the So Cho Pistons branch out beyond 90s pop punk and Ramonescore. This makes for a quick listen that is equally fun and interesting. This album represents 25 years of extreme hard work as a recording band. Knuckleheads might be the album to break the So Cho Pistons out of the pop punk bubble.