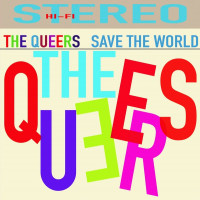 This year has never ceased to amaze me for so many reasons. Luckily, the onslaught of new releases has not seemed to diminish considering current global circumstances. This seems to hold true for most sub genres of both punk rock and heavy metal. Getting more specific, the pop-punk bubble has near exploded as a result of the countless barrage of albums in 2020. On top of stellar releases by Screeching Weasel and the Manges, Ramonsecore fanatics are treated the new Queers album appropriately titled Save The World. This album marks the 11th proper full length from the band who has been constantly recording and touring since the early 80s. Led by legendary frontman and lead guitarist Joe Queer, the Queers are indeed here to save the world.

“Attack of the 5 Ft Bitch” kicks things off in true Queers fashion. This moving rocker starts of both quick and strong with the chorus as the intro. This method of songwriting is always effective as an opener and properly sets the tone for the album. The catchy “Shirley Needs A Dildo” follows which commences with a guitar intro lead which will take you back to Love Songs for the Retarded. This track boasts the classic Joe Queer style of masterfully changing vocal range between verse and the chorus, which will be stuck in your head for days. The band reverts to a more simplistic approach on the garage rocker “Shit for Brains.” “My Heart’s in the Right Place” showcases the band’s ability to craft a 50’s golden-oldie rock song. This one has great vocal patterning with subtle backing vocals in just the right places. The hard rocking returns on “Cheeto In a Speedo Eating a Burrito” which follows. This mid-tempo tune boasts a catchy chorus and is reminiscent of the Queers hit “Tamara is a Punk” from Punk Rock Confidential. The fun continues in the form of the short and quick “Young Dumb and Into Iron Maiden” which tells the tale of a dorky young metalhead. Thanks Joe and Co, as this one hits too close to home (for me and many). “Fanculo A Tutti” follows with a darker vibe in contrast to others on the album. The 50’s golden oldie influence returns on “If I Had a Girl Like You.” This track features solid guest backing vocals courtesy of Kelly Ogden from the Dollyrots. The upbeat garage rocking “Hong Fucking Kong” follows. This track was initially featured on the Queers side of the split 7” with the Two Tens from earlier this year. This song tells the tale of the band being stuck in an airport in China while on tour. I dare you to get this song out of your head with its infectious vocal lines and hand claps. Similar to the album opener, “White Power Feud in Atlanta” is a heavy rocker that commences with the chorus. This is the most contemporary the band gets lyrically on the album. “Bubblegum Girl” sounds exactly as you would expect based on the title. This upbeat track is accompanied with background keys. Kelly Ogden returns for more backing vocals on “Let the Rain Wash Away My Tears.” This is the type of classic mid-tempo love song the band has been known for now for many years. This mid-tempo paced is continued on “Leave That Girl Alone” which follows. “Nightmare to Deal With” will take you back to the 90s Lookout Records era of the band. The album concludes with the humorous “We Love Our Fans.” Joe and company poke fun at their fan base on this fun rocker which is their way of writing a love letter to their fans.

The Queers have successfully incorporated all their previous styles into one package on Save The World. From solo leads to garage rockers and golden oldies, this album showcases what the band is all about. The Queers continue to wear their love for and influence by everyone from Black Flag, Angry Samoans, the Ventures and Beach Boys on their sleeves. Long time fans should certainly be content with this new release. Joe Queer and company have devoted their career to a style they have both crafted and perfected. Unlike other derivative pop punk bands, the Queers continue to offer a well balanced album with enough variety to prevent monotony.