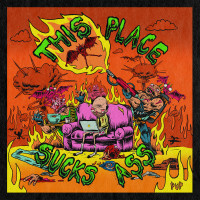 PUP has a very different sound from other punk bands, while somehow still sounding distinctly punk. The guitar playing is very unique, the rhythms are unlike anything else in punk, and absolutely nobody utilizes gang vocals to the extent (or with as much success as) PUP does. They manage to be pop-punk, but without the punk getting buried in the pop. But after three excellent LPs, that unique, PUP style of punk has lost its novelty, What’s left in its place is a quality punk band with interesting things to say, but the PUP style doesn’t immediately grab you by the throat on the EP, This Place Sucks Ass, the way it does on their three full-lengths simply because it’s not new anymore. Still, after giving it a little time, the subtleties of this EP have started to grow on me and it becomes clear that, far from being a band of cheap gimmicks, PUP are just a genuinely good punk band.

“Rot” succeeds because of the visceral body imagery in the lyrics that really leave a lasting impression on the listener. “Anaphylaxis” is an interesting subject matter, in that it’s a whole song about a serious anaphylactic allergy attack. It’s an odd song topic for a punk band, but the band manages to make it into a fun pop-punk song with some foreboding moments, but mostly, from a musical standpoint, it’s a complex but upbeat pop-punk song. Then comes the cover of Granddaddy’s 1997 indie-punk classic, “A.M. 180.” PUP really bring out the punkiness of this song, more so than the original, and the band even plays the keyboard parts from the original song on a guitar instead. The penultimate track, “Floodgates,” and the 70-second-long hardcore closer, “Edmonton,” seem to tell one continuous story about frontman Stefan Babcock missing a friend’s death and subsequent funeral due to being on tour with the band. The songs manage to capture that gut-wrenching heartache without becoming whiny.

Most of this EP is leftover material from last year’s LP, Morbid Stuff, and that makes sense when you listen to the EP. But that their leftover material from a recording session can be of this high a quality is a testament to how good this band is. But the biggest thing that This Place Sucks Ass demonstrates is that, when the novelty of PUP’s unusual style wears off, you’re still left with a really good band.

Heart and Lung: You Wanna Know The Truth? [Reissue]

Fuming Mouth: Beyond The Tomb [EP]