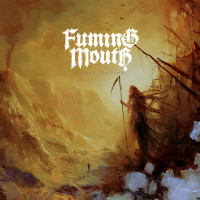 This doesn’t really cast me in the best light as a music journalist, but fuck it, we’re all friends here. My interest can be quite easily piqued by a band using Marisuz Lewandowski artwork for the records. This became clear over the last couple of years and maybe the record with the most striking of Lewandowski’s pieces, was Fuming Mouth’s The Great Descent from mid-2019. The Massachusetts-based 4-piece recently signed to Nuclear Blast and are back with a 3-track EP to showcase the development of their sound.

Where The Great Descent was a straight shot to the face, a collection of tracks made up of pummelling death metal/hardcore that makes a mockery of what the genre banner of deathcore now represents, the three tracks we have in Beyond The Tomb do, just as one might have hoped, hint at a band becoming more at home with their sound; and then stretching it. There’s no diluting of the power and impact here I should stress, but as the title track emerges, an almost trad-metal solo announces its arrival and there’s another full face-melter around the mid-point, which I maybe didn’t see coming but is certainly welcome. In the mid-tempo swing of the chorus (if chorus isn’t too strong a word), there are quasi-melodic backing vocals as well. So the song traverses a lot of ground in its sub 5-minute runtime and it feels natural and at home throughout, before closing out in an extended squall of feedback. It’s a really strong song and probably my favourite of the 3 on offer

Second track and recent single “Master of Extremity” is probably closest to what the band sounded like on the debut record. The guitar tone is death metal as hell throughout the 3 tracks, but it feels especially grimy here. There’s a good range in the vocal delivery as well. Beginning with the more typical guttural death growl, you’re also treated to easily intelligible sections which do add a dimension when compared to many death metal bands. Final track “Road to Odessa” is another gear shift in that it starts out basically as a doom track. Slow, sludgy as hell and malevolent. It then picks up into a crunching, grinding verse section before stepping back again into the slower tempo; but the ferocity that can be absent in sludge or doom bands is front and centre. I’m not sure Fuming Mouth know how to make music that doesn’t sound angry as hell, to be honest. And I mean that as a compliment.

In short, these three tracks do a damn fine job as an EP. They show different sides of a band who are clearly growing and for me, it’s easy to see why there’s a lot of eyes on these guys at the moment. It’s also worth mentioning this was mixed by Kurt Ballou, so suffice to say it sounds wonderful. The guitar tone especially is glorious. Rusty buzzsaw wonderfulness that I’m currently thinking should be employed on all music ever made. If you like Gatecreeper, Terminal Nation, High on Fire, Nails, or any one of a number of bands that sit somewhere in the middle of the heavy genre wheel, but ultimately can be simply described as ‘metal as fuck’, then you’ll get a kick out of this. Now they just need to fulfil their potential for a killer second album – and I’ve got a sneaking suspicion they’ll manage that just fine.