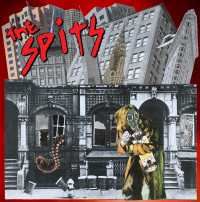 At this point, the Spits are like locusts- hibernating a number of years only to re-emerge and to walk among the surface dwellers. Surely, there’s a certain comfort in the fact that no matter the atmosphere- be it orange demagogue wreaking havoc from the White House or be it the age of myspace autoplay- the Spits will return to kick out super grimey, super fun three chord punk that cribs from the Ramones and Misfits while maintaining a certain nihilistic edge.

On their new self-titled LP, or Spits VI as most of us call it, the band once again does what they do best. The songs here all exist in a murky, charge. The band is one of the few groups where purposeful lo-fi delivery adds weight to their blunted strike, rather than weakening the message. And again, the lyrics here focus on self-destruction. “Up all night” is a somewhat uncharacteristic slow stomper about being on the wrong side of a bender. “Breakdown” follows in the great path of punk songs about freaking out and not being able to handle modern society.

True, songs like the aforementioned “Up all night,” do find the Spits slightly coloring outside of the usual Spits line. But, that being said, the Spits slowing down a song by about 30 percent is about as radical as these tracks get. For the most part, these songs bop along with a hard crunch while robotic voices blurt and bleep over the smash. “Lose my mind” is a killer, lovelorn track, driven by the classic Spits neo-new wave synth.

Yet, even with that being so, the time frame between V and VI may give this new record more depth. In addition to the fact that these tracks really are some of their best jams- and arguably their most pop-oriented tunes to date- more than before, a certain humanity creeps up from these robotic windpipes.

Maybe one of the most clever aspects of the Spits is that even though they sound like they stepped out of Plan 9 from Outer Space, wedged between the machine buzzing and alien synth is something doubtlessly human. “Everybody hates me and I don’t mind,” they wail on “out of time.” “It’s over” focuses squarely on regret. Because the band has been away for so long, now, they’re able to comeback with, a perhaps short record, but one that underlines who they are and also, underlines who we are. The Spits are often portrayed as boneheaded goons. But, more than any of their previous records, Spits VI shows that they’ve got the calculating brains of robots and hearts that are distinctly flesh and blood.