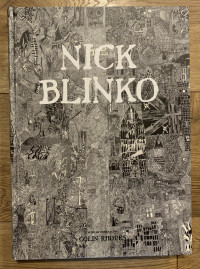 To gaze upon Nick Blinko’s artwork is to gaze into insanity. The Rudimentary Peni frontman has made this topic the core of his work for about forty years, both sonically and visually. Fearlessly, he has let us, the listener/viewer, see the world through his eyes which is often tortured, scared, and very, very, very dark.

Rudimentary Peni covers are as distinctive and as powerful as the music itself. So, over the past decade or so, Blinko has gotten the same recognition he deserves for his pen-and-ink works that he enjoys with his indelible band.

Nick Blinko works as a portfolio, rounding up about 60 of his drawings, most of which are “pull outs” that extend beyond the dimensions of the cover itself. The paintings range from his earliest works (as an adult) through the present. Off the bat, the amount of detail is striking. Each of Blinko’s drawings include thousands upon thousands (and maybe even millions) of miniscule pen strokes. The effect that, as he builds the tiny slashes on top of each other, he creates a sort of texture the gives his pictures an uneasy motion. It doesn’t need to be said, but the level of detail and skill here is unparalleled, breath taking, and stunning.

Yet, when viewing these drawings together, it also becomes apparent that he has a keen eye for space. Blinko likes to cram every nook with tiny marks. So, when he leaves spaces open, creating seas of white space against landmasses of black, the open space has a massive effect.

Like Dali, Blinko likes to use themes and revisits them throughout his eras. Of course, skulls are prevalent here, as are ghouls, religious symbols, moons, and mental institutions. This would be expected by any Rudimentary Peni fan. But, perhaps what is less expected, is the amount of mileage, and the amount of nuance he gets out of the repetition of these symbols. “Castle escape” features a character chained inside a prison or institution, but instead of looking through the cell window, he stares intently at a chess board, which doesn’t even have any pieces. Perhaps despite his physical restraint, the character here is still more chained by the internal puzzles of life, as suggested by the game board. “Black building” features a intuitional like structure that is maddening in of itself- doors and windows twist in on themselves, lines are crooked and sloping, seemingly intertwined for ever- yet despite the insanity of the building, it is uncharacteristically set on a plain, calm backdrop. The metaphors here are limitless and often self-evident.

Once in a while, Blinko does break from his black-and-white confines and applies colors, such as with “Shaded Conchology” and the all blue “Universal Lighthouse.” The ghouls and ghastly shadows are in the drawings as well, but at least for “lighthouse,” once in a while, a small glimmer of hope breaks through the nightmarish and doomy imagery. And that’s not to say that all the pictures have positive signs. “Death Sentence” a relatively new piece (which also finds the RP death embryo reappearing) features an “in memorandum” and seems to comment that life itself is a death sentence.

Still, other newer works, such as “Diamond Diviner,” lean more towards the psychedelic and outward seeking, even if they too, are draped in black. The fact that Blinko sometimes does express sheer hopelessness, and doesn’t try to sugar coat it, makes it all that much more effective when he does offer a message of hope, as small as it may be. He’s also skillful in that he may play around with doom and gloom symbols, or well worn ones like the Pope, his usage is a bit more clouded in its statement, giving his work a wide array of expression that, in that open ended statement, avoids cliché. The fact is, this work is stunning and limitless in its conversation.

Zagava’s presentation is top notch. The book itself is well bound on high quality paper that makes the book have a true sense of import. Colin Rhodes contributes an excellent essay that explains Blinko’s background and gives some insight into his works. Doubtlessly, punk is packed full of groundbreaking and moving visual artists. So, it is quite a claim to say that Blinko is one of the very greatest artists in punk, or anywhere, really. This portfolio proves the claim true, once again.

Bambu: Sharpest Tool in the Shed